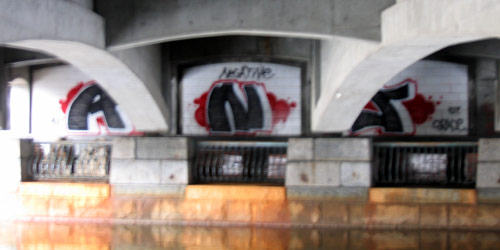 It’s that time of year again, it seems like every year around this time, Waterplace becomes covered in graffiti (as does much of the rest of the city). Last year at this time I contacted the Downtown Improvement District (DID) to see what their jurisdiction was over Waterplace. They told me it is not in the area that they are responsible for, however they did patrol it and report problems to the Parks Department. This year we have the Mayor’s new Graffiti Taskforce, people with a vehicle and presumably a budget to tackle graffiti, but this year, Waterplace is again in the same sad state it was last year.

Now, I was told last year that the DID shuts down their graffiti operations in the winter because their machinery depends on temperatures being above freezing in order to work. One might also be able to assume that the city’s machinery has the same need for above freezing temperatures. But that does not mean that someone can’t get out with some cleaner and a scrub brush and work on removing the graffiti by hand. Especially if that someone was caught and convicted of tagging public property and was sentenced to graffiti removal. Regular citizens don’t have fancy graffiti abatement equipment and are forced to scrub when their property is tagged, no reason the Graffiti Taskforce can’t be doing the same.

In order to remove graffiti of course, the Graffiti Taskforce needs to know its there, how anyone could miss the graffiti in Waterplace is beyond me, but let’s just for argument’s sake believe that no one in city government is aware of it. What do we do? Well we go online to fill out the handy Graffiti Removal Request Form, how convenient (there’s also a phone number: 1-800-TAGGERS).

This form has some issues though. First of all, at least on my browser, the CSS isn’t rendering properly making the page a little hard to read, but I can suffer through it. Second, the form does not leave a space for additional comments. One of the first things it asks for is an address, well I don’t know what the address would be for “under the Exchange Street Bridge.” So I left the street number blank and listed it as Exchange Street at the intersection with Memorial Boulevard, not very descriptive when you realize where I’m trying to describe. The other thing it asks is what kind of surface is tagged. There is not an option for ’tile wall’ so I chose ‘wall – unknown surface.’ Again, not very helpful. If there were a box at the end of the form for additional comments I could have explained the exact location and the wall type. I really don’t know what good the information I submit will do.

I’ll keep an eye on the situation and report back when the graffiti has been cleaned, or if I hear back from the Taskforce (the form space for my phone number was not working, but I did submit my name and email).

The flood has left an archipelago in Waterplace (well, OK, it is only two islands). You actually have to smell it to get the full effect. All photos by Jef Nickerson Share:Click to share on Facebook (Opens in new...