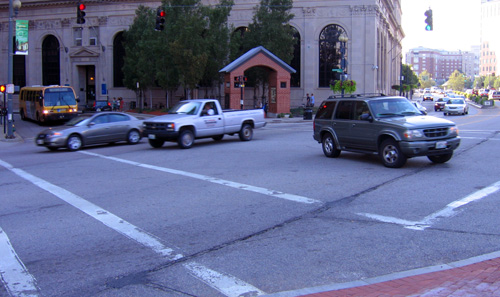 I was reading about Pedestrian Scrambles on Urban Photo the other day and the Memorial Boulevard/College Street/Westminster Street intersection immediately came to mind. 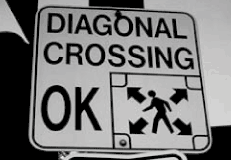 For those that don’t know, a Pedestrian Scramble is when all lights at an intersection turn red and pedestrians may cross both perpendicularly and diagonally across the intersection.

At Memorial/Westminster/College we see an intersection with a large amount of turning traffic, especially off of College and Westminster, plus a large number of pedestrians, chiefly RISD students traveling from the dorm at 15West to classes on the far side of the river. There’s also a bus stop on one corner which is frequented by many RISD employees who need to diagonally cross to reach that stop. Combine this with poor site lines created by the ornate College Street Bridge and you have a recipe for disaster.

The problem with the scramble is getting the pedestrians to obey the Don’t Walk phases. When the light on one street is red and the other one is green and you are normally allowed to cross the street, you will no longer be allowed to cross, only on the all red phase.

The scramble is not often used in the United States, however there are more than 300 such crossings in Japan. The Shibuya Crossing in Tokyo is seen below:

Wouldn’t it be nice if Providence had a tenth that amount of pedestrian traffic?

I posted this photo of this sign last night on our Facebook page where it got a big response. I labeled it as, “shouldn’t this sign be everywhere?” Where it happens to be is on North Main Street just...

LED Crosswalk for bikes and pedestrians

Drivers are rude and pedestrians are idiots