Ok, remember the city’s QAlert System which I decided to put to the test (link, link)?

I had submitted that the bricks were loose in the crosswalk at Benefit and Waterman. I got a response that the complaint was submitted. Well over the last few weeks, not only have the offending bricks been removed… 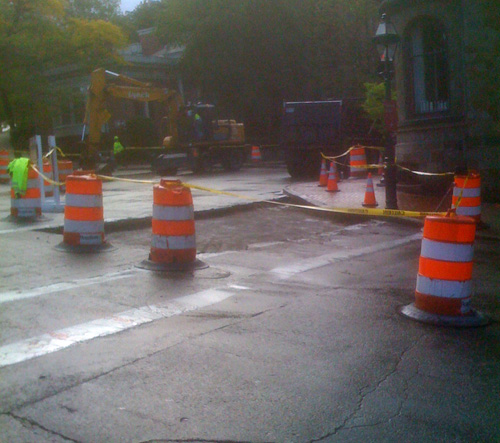 …but so have all the bricks from all the crosswalks at the Benefit/Waterman/Angell intersection, and the top level of pavement, and new pavement has been put down, and the roadway has begun to be re-striped, including new crosswalk stripes.

Now, obviously all this work is not the result of my one submission to the QAlert System. So I can’t really assess how the system works from this test.

I will say though, Thank Maude they’ve got rid of the brick crosswalks. What maroon was the first to decide that we should have brick crosswalks in New England? With our winter freeze/thaw climate and snow plows making not infrequent appearances on our streets, brick crosswalks are totally impractical and dumb. I hope this is a trend in the city where we see roadwork projects get rid of brick crosswalks.

On Monday I posted about the city’s new QAlert system for reporting issues to the city and tested it. I sent in a request to repair a brick crosswalk at the intersection of Benefit and Waterman. I received an...