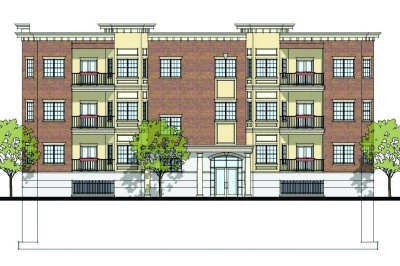 Reading a NY Times article on how the economic collapse has derailed about 5 billion dollars worth of planned construction in The City (“the landscape of New York will be virtually unchanged for two years”), I started thinking about Providence’s many proposed projects and their status. Thus begins the “Vaporscraper” feature, where we review announced buildings that, perhaps years later, only still exist as a press release or a ProJo article. We will examine what was announced, what might have been, and what still may be. This can allow us to keep track of what was proposed and allow us to keep the heat under the developer’s feet…

What was it?: 32,000 total sf located just east of Cathedral Square on Greene Street, it was slated to be a cluster of 24 luxury condominium units ranging in size from 900 to 1600 sf. Designed, “as a private enclave surrounding a landscaped entrance courtyard of stone and greenway” it was supposed to have gated access and underground parking with townhouse style living above. It was supposed to be brick-clad and about 4 floors.

What has happened?: Absolutely nothing.

What was the potential?: It could have extended the residential core of downtown closer to the West End and put more feet on the ground near Cathedral Square. It also could have replaced a short, 2 floor structure with surface parking with a larger, denser structure with underground parking. It was a type of residential development common in other cities (especially Manhattan, and its overall look and feel resembled many developments there) but almost unavailable downtown in Providence.

What does the developer say?: I contacted Churchill and Banks for GC:PVD by email and a representative says it is, “on hold… No time frame yet, but not indefinitely.”

What could help?: We all know how “luxury housing” is doing right now… Perhaps, given the less than luxury location behind some office buildings, they could aim for constructing some lower to mid-cost apartments that downtown so sorely lacks and that many people claim to desire, if only the housing stock existed. It’s not the best location for retail, but perhaps commercial space on the first floor aimed at startups or small businesses could gain some traction.

Rendering from Churchill and Banks It’s hard to know how close this project ever came to reality, but anything remotely like it in this economic climate seems impossibly far off… What was it?: The Churchill...