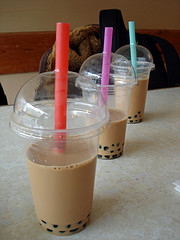 2008 will be long remembered for some seriously miserable economic events. One local bright spark in 2008, however, has been the quiet opening of some seriously interesting food and dining establishments. Ebisu, United BBQ, Tini’s, the crepe place on Weybosset, Noodles 102, and Farmstead Downcity (to name but a few) have helped to break the New Ameritalian lock on the Providence dining scene that we’ve seen in the last few years.

One absolutely fascinating and very tasty addition to this list is the recently opened Bubble Tea House in Canonicus Square (intersection of Westminster and Cranston near Classical/Central High Schools, italicized to encourage all of us to use that term more). For those of you who haven’t had it, bubble tea is a Taiwanese drink craze that’s come to the US via California and NYC that usually contains tea, milk, sugar, and small pasta like tapioca gummy balls that are sucked up through a large straw. I’m a a huge bubble tea fan from my years in Minnesota (the Twin Cities had several Asian establishments that made amazing bubble tea) and I searched Providence in vein when I arrived. Sure Tealuxe had it on the menu, but the flavors were weak, the consistency thin, and the tapioca balls hard and chewy. Slowly, several restaurants here started to add it to their menus with varying quality, culminating in my favorite to date offered by Sushi Express on Thayer Street.

Now open adjacent to Classical Cafe is Bubble Tea House, operated by two brothers with franchising dreams. The bubble tea is outstanding, especially the tapioca pearls which are likely the softest and tastiest in the area. Flavors are strong and the consistency of the drink (often a problem with local outfits who can’t get a good ice/milk/tea balance) was perfect. I once heard a chef say on TV that they want menu items that are beyond good, they want product that’s “cravable.” These are definitely addictive drinks to crave.

The outfit is slick inside and their bubble tea menu exhaustive. Knowing their young audience nearby (only slated to grow once the technical school across the street opens) they have karaoke nights and video gaming nights (a PS3 is hooked up into to a huge TV screen on the wall – why haven’t more youth oriented cafes thought of this?) on their calendar. An article in Motif on the brother and their business is here

Slowly, Canonicus Square and its Westminster environment is becoming an interesting place, yet another funky and hip piece to the West End puzzle. The biggest challenge will be getting the word out that Bubble Tea House, White Electric, Classical Cafe, a new brick oven pizza restaurant, and the new Ada Books location (to say nothing of recent Broadway additions) are destinations of serious worth to residents of all neighborhoods.

View Larger Map Speaking of the “Retail to Restaurant” trend we were all debating, the newest example is located nearby on North Main Street (1184, across from East Side Urgent Care). This is where the long...

As we look forward to 2009, I thought I would chime in with my cuisine wish list for 2009. Unfortunately, my wish list tends to look the same from year-to-year except this year, two items shockingly came off the list:...

Providence’s restaurant scene continues to, out of the blue, get more interesting and less New-American/Italian dominated (see the Chinese Laundry, the crepe place on Weybosset, and Tini’s) with the opening...