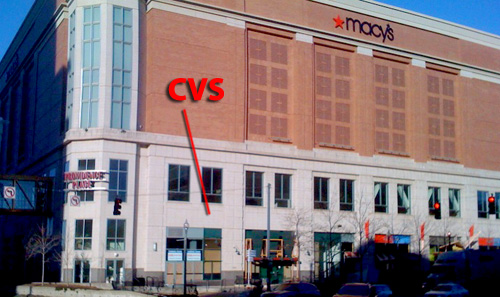 In the windows of the large, street corner, sidewalk-fronting retail space that wraps around where Memorial Boulevard meets Francis Street are large “coming soon” CVS/Pharmacy signs. The pharmacy-less CVS on the third floor of the mall will be closing and moving to this new street level location with a pharmacy.

There is also a CVS in Kennedy Plaza without a pharmacy. Word is that this CVS will remain. Last year there were reports that the CVS in Kennedy Plaza was planning to expand into the neighboring retail space on Westminster Street (formerly occupied by the Christian Science Reading Room, now the home of the Boston Sports Club retail office and ArtTix). It is unclear what the status of those plans are now.

Certainly one of the things that is missing from Downcity being a fully functioning all inclusive neighborhood is a pharmacy. A strong urban neighborhood should have what it’s residents need within a short walking distance. Downcity’s residence now have to travel to North Main Street or Atwells Avenue to find a full service pharmacy.

One concern about this mall location is that the specific site has walkability issues. 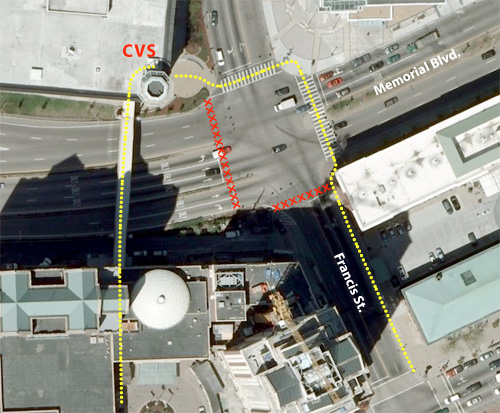 This location at the mall has been a revolving door of failed retail endeavors. Two issues seem to contribute to that; the fact that it is so far out of the regular flow of the main mall itself, and that it is situated at a pedestrian dead end.

In the graphic above we see that there is no pedestrian crossing of Francis Street at the south side of the intersection and no crossing of Memorial Boulevard at the west side of the intersection. High speed traffic coming off of Routes 95 and 6/10 are the reason for these pedestrian restrictions. Pedestrians either have to approach from Downcity proper from the far side of Francis Street or utilize the skybridge through the Westin going up above street level then coming back down to street level to reach this retail spot. The line of site from Emmett Square does not match the path by foot one needs to take to reach this location.

When originally conceived, the mall was not supposed to feature the skybridge. The intersection of Memorial and Francis was to be better pedestrianized to allow people to reach the mall by foot comfortably at ground level. As we know, this plan was thrown out the window, the Memorial/Francis intersection was made to prioritize auto traffic, and pedestrians were relegated to the skybridge.

Pedestrian access from the Capital Center area is not as poor, a simple walk across Francis Street from the corner outside GTECH gets pedestrians to this location. The new CVS location should benefit from a large workforce in Capital Center at GTECH and soon Blue Cross Blue Shield, as well as the AmEx Building if that gets a tenant after Fidelity clears out (has Fidelity cleared out yet?). There is also a potentially sizable residential population in Capital Center; the Avalon Apartments at the train station are full, the Waterplace condos are slowly coming on line, and the Capitol Cove condos will begin accepting tenants soon (in this economy though, sales at Waterplace and Capitol Cove are said to be slow).

Shoppers who arrive at the mall by car and park in the garage never see this retail space as it is not within the flow of any areas a shopper using the garage would pass through. Supposedly CVS will be installing a number of signs within the mall to direct people to this new location. I question if suburban shoppers arriving at the mall will view this location as a convenience, having to walk all the way to the ground level then back to the parking garage and out, or if they’d rather just stop at one of the many CVS in the region that have ample parking at the front door on their way home to the suburbs. Will the Downcity residential and office populations be enough to support this location? I think it is likely they will be.

While this location has some issues, a strong retailer like CVS is what this location needs to stop the revolving door. The new pharmacy fills a hole in the Downcity neighborhood’s retail needs and though access to this location is not ideal, I believe the shoppers will overcome them.

In the long run though, the Memorial/Francis intersection needs some calming. Traffic coming off the highway needs visual cues to indicate that they are now in the city and need to slow down and pedestrians need to be better accommodated. 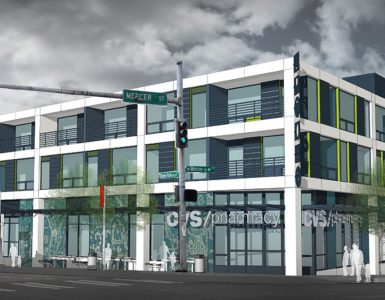 Last weekend I was in Alexandria, Virginia. My hotel which was mega-cheap and right next to a Metro station was out in the exurbia hell next to the Beltway surrounded by surface parking, but not too far away was Old...

As I’m sure many walking or driving by have noticed, the sidewalk fronting mall CVS has opened at the Francis St/Memorial Blvd intersection. All of the J&W students who will be living at Capitol Cove will now...