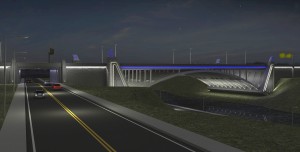 A new rendering of the new Pawtucket River Bridge has been released, all I can find online is the little image above that PBN had in their article.

Talk of the bridge around the intertubes:
The Bucket Blog: Bridge 550 an “Open” Process?
The Pawtucket Times: New highway bridge lauded as ‘iconic landmark’ in the making
Providence Business News: Pawtucket I-95 bridge design revealed

The task force intentionally borrowed motifs from such structures, Kazarian said. For example, Art Deco eagles adorn City Hall, and the four stone pillars on the new bridge will each be topped with a representation of an eagle’s wing similar to that seen on the City Hall tower.

Viewed from a distance downstream, the bridge will be marked by a graceful silvery arch over the water, made of metalized steel and illuminated at night with crystal-blue light-emitting diode (LED) lighting.

The Pawtucket Times reports, “The $100 million project is expected to be advertised to potential bidders this July, with construction to begin approximately a year from now, according to the Rhode Island Department of Transportation. Funds from the federal economic stimulus package will not be used for the span’s construction, according to Kazem Farhoumand, RIDOT’s chief engineer.” The project is scheduled to take 2 years to complete.

And The Bucket Blog seems not to like it. 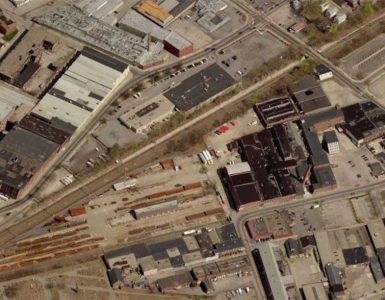 A long-discussed plan to expand passenger rail service to Pawtucket and Central Falls got a boost on Wednesday from a $13.1 million federal TIGER grant which will help build a new commuter rail station here, something...

Earlier in the month I posted about the release of designs for the proposed New Pawtucket River Bridge on Route 95. At the time I was only able to track down the teeny tiny little image posted with the PBN article on it...

View Larger Map Frymaster over at The Bucket Blog has the scoop about last night’s meeting regarding the Route 95 Pawtucket River Bridge. I meant to post about this meeting, but neglected to get to it, sorry. You...