Yesterday’s Journal reported on the financial constraints at the Dunkin Donuts Center. While the shiny new Dunk opened to much fanfare and promises of increased income for the state (the Dunk’s owner) and visitors to the city, we all know that the economy jumped off a cliff and took all those revenue and visitors with it.

Certainly the economy has hurt the Dunk, but also, I never have any idea what is happening at the Dunk. The old Dunk had a seriously old variable message sign out front that advertised upcoming events.

As you can see above, the Dunk hosted Hillary Duff in July of 2005 (the sign also says it was 115°, I can assure you, it was not). Though there was an LED screen in earlier renderings of the renovated arena, it was phased out of later renderings as the price of renovations rose over time. So now there is no passive way to see what is coming up at the Dunk. 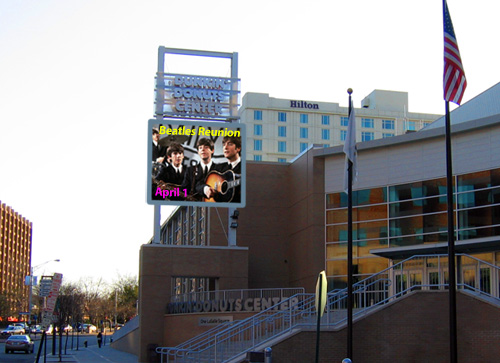 I mean if you knew the Dunk was hosting a Beatles Reunion tonight you would have totally bought tickets, right? A big LED screen costs a pretty penny, which is why it was dropped I would assume, but having something outside that advertises events helps get people in the door. How many people drove by the Dunk recently blissfully unaware that the Flower Show or Boat Show was taking place inside? And how many people would have stopped and paid admission had they realized what they were missing. Sadly, it is probably not gonna happen in this economic climate. And it is probably not appropriate to use stimulus money for it. Too bad, I love big bright signs.

While I’m talking about the Dunk, I have to say something about the entrance facing the Hilton. Perhaps the landscaping there will be finished up this spring. I hope so because right now it is just some asphalt paths and some sad little plantings. Here’s a before image: 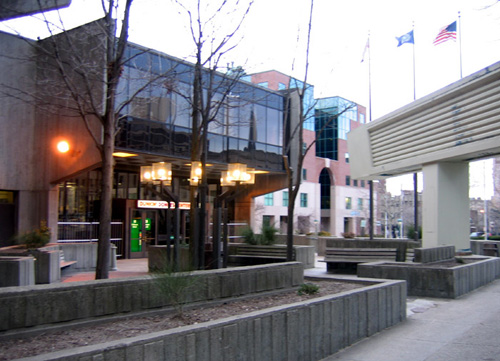 This was actually a nice little space that no one knew was there. I would walk by every day and didn’t realize there were benches until I walked down the alley to take this picture.

Here’s what the renderings showed: 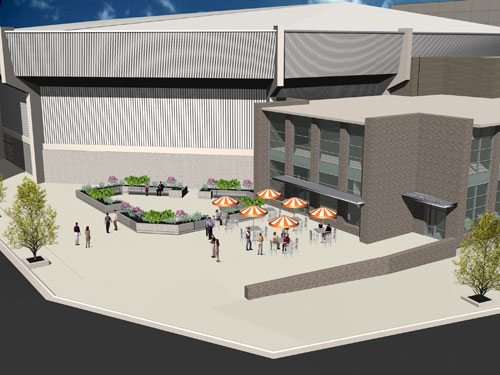 Stunning? No, but certainly better than the asphalt paths and sad plants that are there now. Maybe people could get lattes to go at Starbucks and sit at those little cafe tables at the Dunkin Donuts Center and drink them. That’d be funny.

Back in September the Dunkin Donuts Center applied for Zoning permission to install a video marquee sign on the Sabin Street side of the facility. Today a reader sends us a photo of it being installed. Share:Click to...

Photo by Jef Nickerson A while ago, I wrote about the need for a sign at the Dunk. When the renovations of The Dunk were first proposed, an LED sign was included in the renderings, but as the costs of the renovations...

September 5th, I went to the Press Event for the re-opening of the Dunkin Donuts Center. Today I finally had the opportunity to download my photos: Share:Click to share on Facebook (Opens in new window)Click to share on...