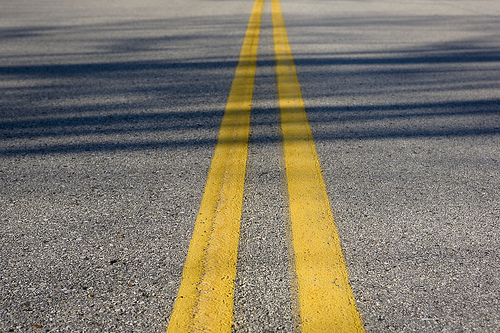 Much to my shock, newly painted lane markers have popped up around the East Side, most notably on Waterman and Angell Streets. In many areas, actual lanes and parking areas of the streets are now clearly demarcated.

This has the potential to end the fun but often dangerous third-world style driving game of “create your own lane” that has often defined East Side driving, especially as cars on Angell race to be the first ones through the lights before getting to the bottleneck of parents’ SUV’s parked in front of the Wheeler School picking up and dropping off kids.

In other areas, it looks like white painted crosswalks are coming to some heavily used pedestrian intersections and others that should be more heavily used than at present. Saddly, it doesn’t look like any of Wayland Square’s nearly 100% faded white crosswalks are slated to be done as yet…

The answer is the Connector itself, that might as well be called the Disconnector. While in theory it speeds up traffic along its corridor, its limited-access ramp system also cuts off the smaller streets that could...