In anticipation of Bike to Work Day 2009 (May 15th!) the Providence Bicycle Coalition has created a series of “Bike Trains” so you don’t have to go it alone. Commuting by bike, no matter how long the distance, can be a bit intimidating on RI roads. By joining these bike trains, you’ll be biking with other folks headed towards the city.

For those who may be unfamiliar with the term, a bike train is one or more experienced bicycle commuters who follow a published route with predetermined meeting points. Other cyclists can hop on and off the train at any point. It’s a great way for new cyclists to give bicycle commuting a try in a safe environment!

To take this one step further, the East Bay Bike Train has added LIVE UPDATING via GPS! This means that you can check the status of the group to see not only where they are, but also make sure you haven’t missed the group.

This begs the question, why doesn’t RIPTA have this?

Seriously, how great would it be if all the bus shelters had, at minimum, the time until the next bus?

Maybe we could start a gorilla version and just request everyone with an iPhone start updating a common map and publishing route updates. 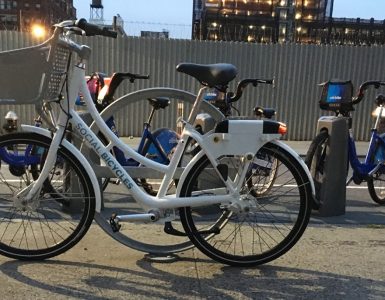 Image from Social Bicycles’ blog City Councilman Bryan Principe, who represents Ward 13, will introduce a resolution at Tuesday’s council meeting that would authorize the Elorza administration to enter into a five... 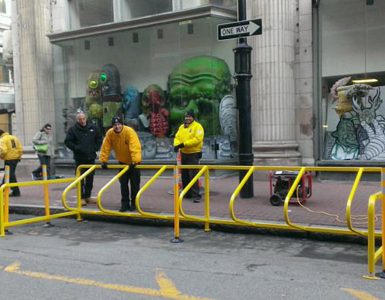 New bike corral on Eddy Street, a first for Providence?

The Downtown Improvement District installed a new bike corral today on Eddy Street, like literally, on the street. Is this the first time an on-street bike corral has been installed in Providence?