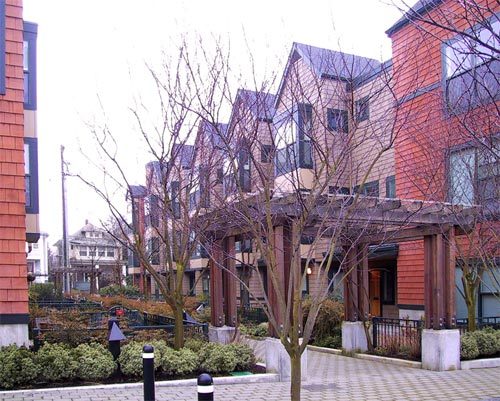 Well, that’s essentially the theme of this NY Times article titled “Europe Imagines Suburbs Without a Car.” While trying to make the content “fair and balanced” in a Fox News-ish sort of way, it’s impossible to escape the tone and tenor of the article suggesting that the Europeans are waaay ahead of us on this. They have a deeper commitment and projects on the ground.

While not a deep examination of the problems here in the US with suburban smart growth, the article does do a good job introducing some of the challenges facing American advocates (restrictive zoning, lenders worried about the true market rates of such homes, public inertia, etc). With Duval Patrick in MA having already suggested that future development should be clustered in high pedestrian and mass transit areas, it’s time for RI and all other neighboring states to push on this as well…

I personally believe that for such an effort to work here, advocates need to drop the idea of advocating that Americans give up their cars for mass transit, which to me screams “Oooh! Lets start a culture war!” and seems doomed to fail. I think the goal needs to be minimalizing auto use and making mass transit rational and convenient for more people (which is where Duval Patrick is right that future schools, retail, workplaces, etc should be clustered around transit nodes, not in the middle of nowhere). For those looking for who in RI to support on such suburban sustainability issues, the Scott Wolf led GrowSmartRI is a great place to start.

A Fall River to Cape Cod regional bike route, Athens, Greece a city without suburbs, RIDOT rolls the ball on charging for highway sign ads over to the General Assembly, and more in today's News & Notes.

The war on trains [History Eraser Button] What the hell is going on? Opposition to trains is not some kind of Tea Party platform. You aren’t hearing anybody talk about it on Fox News or AM radio. There’s...

The New York Times has a thought provoking article about how the image to the left is becoming a rare site in the US, as the numbers of people moving fall to absolute numbers not seen since WWII (when the country had...