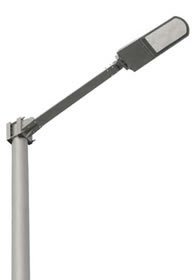 A while back Matt wrote a post about LED street lighting, cities such as New York; Ann Arbor, Michigan; and Anchorage, Alaska have plans to implement LED street lighting. In the conversation I suggested that Providence work on a pilot LED street lighting program in the new street grid built in the vacated Route 195 land. Seems the city actually wants to move a little faster than that.

LEDalux, a company based here in Providence recently contacted the city. Seems they had a number of cities contacting them to start LED street lighting programs and they were wondering why Providence wasn’t one of those cities. So Providence said, “we’d love to be one of those cities, what do we have to do?” The city is now working with LEDalux on an LED product which can be retrofitted into existing decorative street lighting in the city. If the planets (i.e. funding) align, we could see LED street lights rolled out this year, perhaps as part of the Westminster streetscape improvements on the West Side. Westminster would likely be one of as many as three streets that would be part of the pilot LED program.

The city is also working with the General Assembly to create a billing plan with the utilities for LED lighting. Current lighting fees are based on energy use and labor of incandescent lights, which use more energy and need to be replaced more often than LEDs. Some city lighting is metered, such lighting will likely be at the front of the line for replacement with LEDs and the metering will translate the energy savings directly.

Information about the city's plan for overnight residential parking permits.