The toll to cross the Newport span would increase from $2 to $4 for those paying cash. For those with E-ZPass transponders from out of state, the toll would go up even more, from $1.75 to $4. Tolls for commercial vehicles would increase $1 per axle.

The Authority says it needs the toll increases to help maintain the bridges in the future and prevent a $223 million budget shortfall from materializing over the next 20 years.

While we are not opposed to tolls, we think the toll stick needs to be accompanied by a carrot. See: Tolls: A stick with no carrot. Only so many cars can possibly fit on Aquidneck Island. Ensuring we have robust transit options; bus, boat, rail to the island can be that carrot. It should be possible for island visitors and workers to leave their cars in Kingston or Fall River for example and be shuttled onto the island.

RIPTA Route 14, which runs between T.F. Green and Newport, does offer park n’ ride facilities at Routes 138 & 1A just at the mainland side of the Jamestown Bridge, and at First Ave. and Post Road in East Greenwich. However there are some issues. One, marketing, do people even know this option exists? Two, schedule, it has a healthy number of scheduled buses at rush hour, but overall it only makes 17 trips per weekday (and only 6 on Saturday, and none on holidays and Sundays, total FAIL for tourists). Three, marketing, yes marketing is one, but it can’t be stated enough. If the Newport Visitors bureau would push options that had visitors leaving their cars on the mainland, people might actually do it.

It is no secret that the state is in a budget black hole. If the Turnpike and Bridge Authority needs tolls to keep it out of the budget abyss, then I say jack the tolls. But let’s gets some carrots to reduce congestion on the island, reduce pressure on the bridges, and reduce green house gas emissions. 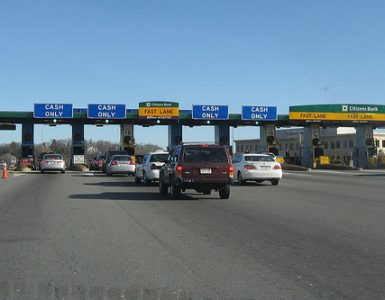 The Rhode Island Turnpike and Bridge Authority has released their report on tolls on the Mt. Hope Bridge. As outlined in the report and reported by the Journal, the toll options include: The same tolls as the Pell...