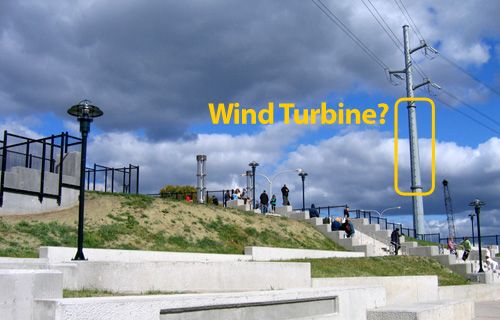 Delon, who is 31 and an architect, is the recip­ient of Metropolis’s 2009 Next Generation prize, along with Julien Choppin, also a 31-year-old architect, and Raphaël Ménard, a 34-year-old engineer. Their project, Wind-it, addresses this year’s theme—which beseeched entrants to “Fix Our Energy Addiction” — with the effortless simpli­city of a Pythagorean proof. The team proposes inserting wind turbines into existing electrical towers or, where infrastructure is broken or spare, building new towers that double as wind-power generators, thus introducing a fount of renewable energy into an aspect of civilization that’s as certain as taxes. With three potential sizes, the turbine towers could be integrated nearly anywhere: Lille, France, China’s Sichuan Province, or the streets of New York City.

…or the waterfront of Providence, Rhode Island.

The India Point Waterfront would be the ideal location to install wind turbines on existing transmission towers. However happily, there is a plan to remove the transmission towers in this location and put the wires underground. Under the plan, the towers would be removed across the Seekonk River toward the East Providence Waterfront (making way for redevelopment proposals on the East Providence side of the river). The towers skirting the Metacomet Country Club in East Providence would remain. Where the power lines are strung along Lyon Avenue and Fort Street in East Providence is a high point at the head of the bay that may collect enough wind to make such turbines feasible. 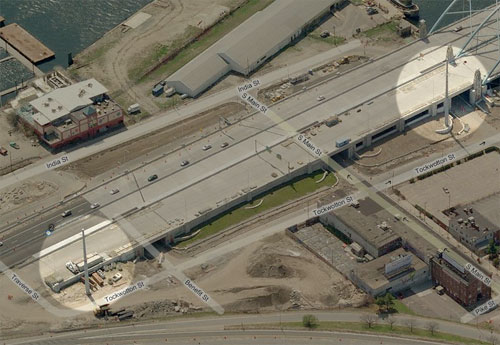 Back on the Providence waterfront, we want the transmission towers gone, that is the best outcome for the area for sure. However, we need not remove all the towers, they are perfectly functional infrastructure. We could keep the two towers on Tockwotton Street for example and retrofit them with wind turbines.

If we have existing infrastructure that can be put to positive use, I say use it. The towers on Tockwotton are outside the park along the edge of the highway. What better entrance to Providence than working wind generators? Recycling infrastructure to create green energy seems an apt project for the Creative Capital. 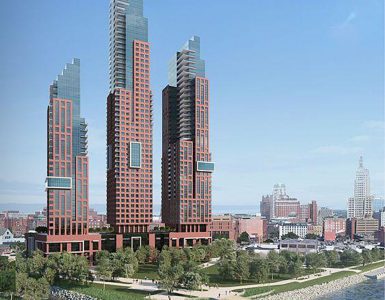 I do not have the time or energy right now to even think or comment on this, but I thought I should leave this here to allow everyone else to comment on it. [alert type=”muted”]See also: The Providence...

Three 360 foot wind turbines approved for the Port of Providence.