I’m including this post as part of the 195 Street Grid series because it highlights a very simple but important failure. These lights have been here for a couple (several?) months; the infrastructure for cars is in place, lights are up and on, islands have been moved to make way for lanes, lanes have been marked… The pedestrian infrastructure however, is an utter failure. The walk lights don’t work, sidewalks on two of the four corners are dug up and not replaced (and have been that way for at least several weeks if not longer); generally, very little thought or care seems to have been given to pedestrians (or cyclists for that matter) at all.

Below is the view from the center of the intersection, where there is a raised traffic island that has no place for pedestrians to stand, meaning it cannot be used as a pedestrian refuge; you can simply cling to the edge of it like a life raft and hope you don’t get sideswiped by an errant driver texting or applying makeup or eating a Boston Kreme or some such. The island on Point Street at the east side of the intersection has been removed to create a left turn lane. I’m a rather aggressive pedestrian, but I simply would not attempt to cross Point Street here, it is far safer to cross midway between here and the bridge, where there is a traffic island (yes, I am saying, it would be safer to jaywalk).

This exact configuration is temporary (see final plan below) to accommodate traffic detoured by ramps that are closed and others that are not yet open, so this being not exactly the best environment for pedestrians I can understand to a point. It’s not really a very good excuse though. I lived in Boston when the Big Dig was ramping up, and though you would never be able to walk the same way twice as detours were constantly moved, MassHighway made sure to accommodate pedestrians, and as confusing as it was sometimes, you could navigate downtown on foot. The values in Boston would not allow for anything less, why should we accept less in Providence? 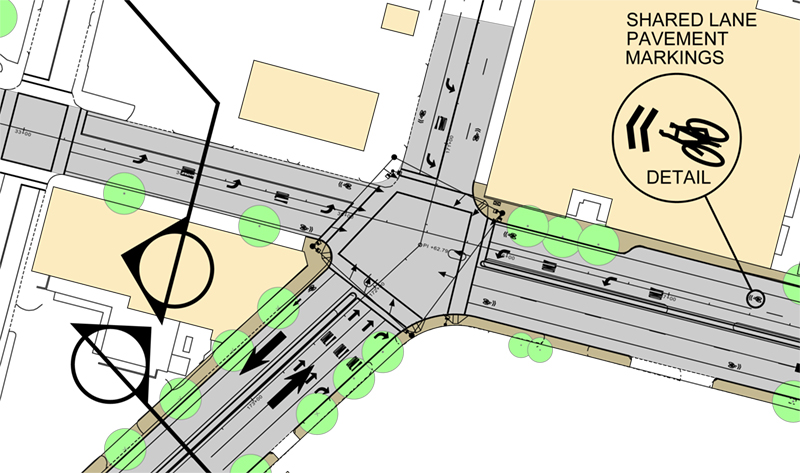 And even as temporary as this configuration may be, how hard is it at the absolute very least to turn on the walk signals? I mean, they are there, with countdown lights and everything. Just turn them on. The intersection would still be an utter nightmare for people on foot, but ever so slightly less nightmarish than it is now. The state of this intersection brings up two huge concerns. The rebuilding of the grid will be a nightmare for pedestrians and cyclists as RIDOT focuses on moving cars at the expense of feet and pedals. And, is this what Wickenden Street is going to look like?

This is the second of a series of posts we will be doing about the 195 Street Grid. To view all the posts and more information, please visit our 195 Relocation Project page.