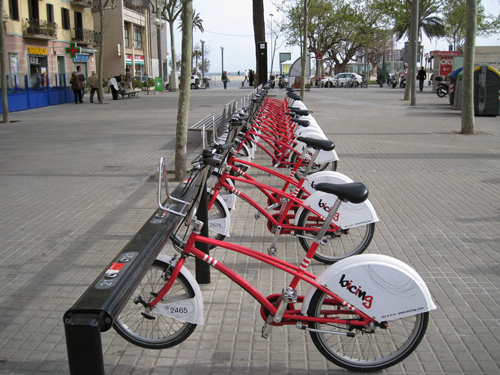 Boston.com reports that a bike sharing program is coming to Boston with plans of expanding to Cambridge, Somerville, and Brookline.

The new system will be very similar to infrastructure already in place in cities like Montreal and Paris. Riders can pick up bikes at one of the 290 stations with a swipe of a credit card, ride it wherever they need to go, and dock it at the station closest to their destination – no heavy locks and chains necessary. In Montreal, people can pay abut $78 per year or $5 per day to participate, which is quite a bit more economical than owning a car.

This sounds pretty awesome. I can think of several times when I’ve gotten off the commuter rail in Boston and thought, “If I only had a bike…” Although, then I usually come to my senses and think, “…I’d get killed by a car.” I hope that in addition to adding more convenient bicycles to the street, more bike lanes and signage are added as well. Simply adding bikes to the mix of crazy Boston traffic doesn’t seem like a complete answer to me.

However, in my opinion, adding more bike sharing programs to cities and towns across the country may be just what we need in order to improve the way bikes are accepted as a form of transit in our auto-centric society. Too often I hear horror stories about people getting practically run off the road by angry/distracted/ignorant drivers. That’s not to say all drivers are bad, but enough people seem to think that roads are only for cars, and bikes are only for recreation (just see some of the comments on the boston.com article).

I applaud Boston for trying this program, and I hope more cities, Providence included, are soon to follow.

Do you think a bike sharing program like this one could work here?

Image from flickr According to blog Commute By Bike, “the City That Never Sleeps has officially requested proposals from private companies with the expectation of implementing a twenty-four hour, 365 day-a-year...