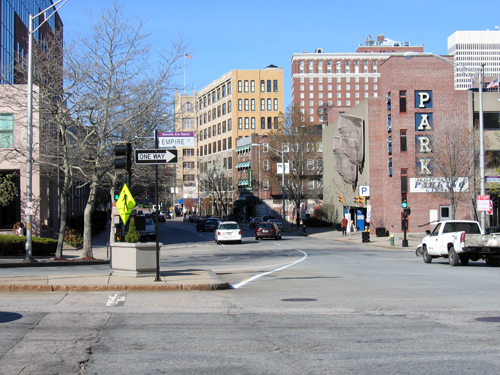 The city Department of Planning and Development has been working for some time on a Downtown Circulation Plan. Signs of the plan are visible already on city streets, Washington Street was made two-way, and the lights at Washington and Empire are built for the future transformation of Empire into a two-way street. Eventually, Weybosset will be made a two-way street as well. A large part of this plan will involve LaSalle and Emmett Squares near the Convention Center.

Please note, there is a key part of the plan that has changed that is not reflected on these drafts. In the final plan, Empire will be two-way straight through LaSalle Square to the intersection of Sabin Street and Broadway. The city originally wanted this, but RIDOT was originally reluctant to allow two-way traffic through the center of the square. RIDOT now agrees that Empire should be two-way through the square, and new plans are being drawn up to reflect that. 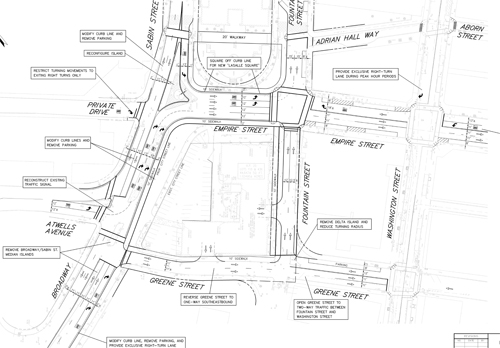 So, let’s review the components of this plan:

The first project will be making Empire Street two-way between Weybosset/Broad and Washington Streets. The angle parking in front of AS220 will be eliminated (currently it faces the wrong way for a two way street), parallel parking will replace it on both sides of the street.

Following the establishment of two-way traffic on Empire, work will commence in LaSalle Square.

The open space in front of the Blue Cross Blue Shield Building (sometimes known as AT&T Plaza for the building’s former tenant) will be squared off, the rounded edges of the square, which now allow for highspeed traffic movements, will be extended to create a proper city block edge to the square. The city war memorial, which was located outside the Dunk prior to construction, is currently in the process of being reset in the current footprint of LaSalle Square.

There were some whispers a while ago (before the economy plunged off the cliff) that the new owners of the BCBS building were contemplating putting retail in the ground floor of that building. Retail at this location (dependent to a degree on what kind of retail) would reinvigorate the square drawing in foot traffic and perhaps encouraging passive use of the open space. Let’s hope the retail plans are able to move forward.

The Empire Street section that moves through the square (in the final concept will be two-way, but shown as one-way in the attached drafts) will be lined up to create a proper street wall. The sidewalks in front of the library at one end will line up with the sidewalks at the end of Aborn Street behind the Hilton at the other end. This will create a proper street wall along the length of Empire Street. Of course, until and unless The Procaccianti Group ever builds their Empire at Broadway proposal (or something else gets proposed and built), the street wall will remain a concept only.

It is not clear from the plans, but traffic from Atwells should also be able to make a quick right then left onto Greene Street to head east toward the Jewelry District. In my Sim City visions for the city, Greene and Atwells would both be shifted slightly to allow them to meet directly at Broadway as a proper crossroad, encouraging eastbound Atwells traffic to continue down Greene Street. In the real world this would require land swaps or takings, certainly not impossible as the affected properties are currently unbuilt, but a hurdle to cross none-the-less.

Broadway between LaSalle Square and the highway goes on a diet. Currently there is a traffic island at the Atwells intersection and a wider island approaching the square. These islands go away, and the northbound (toward the square) lanes on Broadway are pulled in. This changes the feel of Broadway from what currently feels like an expressway construct to a city street construct. Opposing traffic having a yellow line separating it, rather than an island, encourages the traffic to move slower than segregated lanes.

). Currently Fountain Street is 3 or more lanes between LaSalle and Emmett Squares. The new proposal makes Fountain two-lanes with angled parking on left side and parallel parking on the right. At the Fogarty Building, the sidewalk would be pushed out into what is now the street allowing for a larger footprint for the redevelopment of that parcel (a project that is currently stalled).

The small piece of Mathewson Street that runs between the Fogarty and Journal Buildings will be made two-way as part of the redesign. This coupled with the two-way traffic movements on Empire through LaSalle Square eliminates the need for the u-turn from Fountain onto Sabin at Emmett Square, as most traffic now has two opportunities to make that movement. As plans for Emmett Square are finalized, we’ll see the benefit of removing that u-turn from Emmett Square.

Pedestrian link to the Dunk

Currently, there is a walkway from Aborn Street across Fountain, through the square, across Sabin, to the Dunk. This walkway will be maintained and the city is figuring whether or not to put raised crosswalks for this walkway on Sabin and Fountain. I encourage the city to say yes to these raised crosswalks and to eliminate the traffic light on Fountain that is supposed to serve this crosswalk (the one at Sabin is already gone, through design or neglect I’m not sure). The raised crosswalks will force traffic to stay at reduced city speed on both Fountain and Sabin (slowing traffic on Sabin entering the square) and allow pedestrians a better path across these streets.

At Empire and Fountain (outside the library and Trinity Brewhouse) I would like to see the use of curb extensions to prevent cars from parking in the crosswalks and reduce the gap that pedestrians need for crossing Empire Street.

But what about the parking?!?

I can’t believe I’m bringing this up, and I can’t believe what my opinion is on this subject, but a lot of street parking goes away in this plan, some legal, and some that is not legal but is used as habit (such as people parking all over LaSalle Square during events at the Dunk). The non-legal habitual parking I’m not worried about, and wish parking would be enforced now, but there’s a lot of spaces on Greene, parts of Fountain, and Broadway that are disappearing.

Almost all the street parking on Greene Street between Broadway and Washington goes away, and that is a significant amount of parking for people patronizing places such as Trinity (both the Brewhouse and the theatre), Bravo, AS220, and others. I don’t think Greene Street actually needs to be two-lanes eastbound between Broadway and Washington. Westminster works perfectly fine as a one-lane street with on-street parking. Greene should be reduced to one-lane eastbound with the proposed second lane devoted to parking. If the TPG proposal for the Old Public Safety Building lot is ever built, the proposal was to put the garage entrances on Green Street, which could put more pressure on a one lane Greene Street. This could be addressed, when and if the building is ever built, by restricting parking at the rush hours (when office tenants will be entering and leaving the garage) and allow for parking midday, during the evenings, and on weekends when people are patronizing the destinations I listed above.

Again, like Greene, all the parking on Fountain Street between Greene and Empire goes away in this plan, and Fountain is a two-lane street. Again, like Greene, I’m not convinced this part of Fountain needs two lanes. Again, the solution could be to restrict parking at the rushes or allow parking only in the evenings and on weekends.

Parking is also eliminated on the portion of Broadway fronting the Public Safety Building lot. This is a minimal number of spaces, but contributes to downtown parking needs. The issue I have with eliminating street parking here is that street parking is also a street calming device. Traffic moving past parked cars tends to slow down, as opposed to traffic moving down a street without parked cars. Also, parked cars provide a barrier between pedestrians and moving traffic. I would encourage street parking on Broadway between Greene and just short of the square. 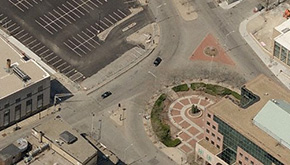 From the Mayor’s Facebook page: The City completed traffic changes to the intersection of Empire and Fountain Streets earlier today. Motor vehicle traffic proceeding from Empire Street is now required to use the...