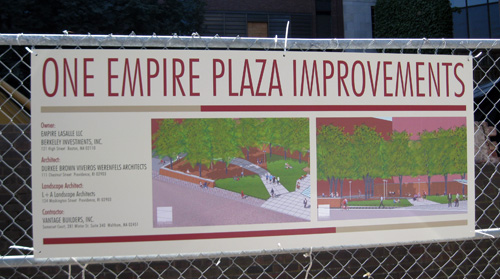 This is a little project I heard was coming, then forgot about, then walked right into yesterday and remembered.

This is the small park that sits basically half a story above Empire Street at the intersection with Westminster.

If one were to climb the stairs and go into the space, it is actually a nice little space. Nice full canopy of shade trees, benches. The problem is, no one really ever climbed the stairs to see it, there is nothing on the edges to activate and no reason to go up there. Basically, it was a dark hole that featured a degree of unsavory activity. These improvements bring the pocket park down to street level so that you can see it from Empire Street. It will be accessible and the unsavory activity should move on as it will now have eyes from the street on it. 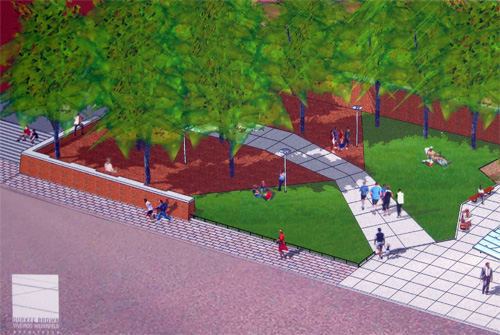 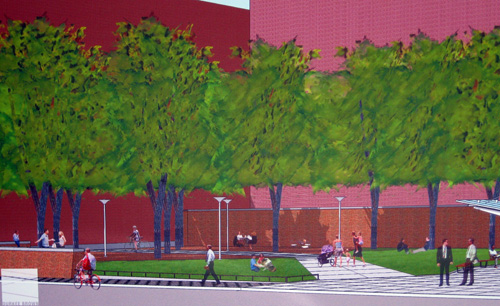 As you can see from the renderings, a large portion of the wall (which currently extends almost to the One Empire Building entrance) is removed, bringing that end of the park down to street level. Due to the grade changes up onto the Westminster Walkway, the park still slopes up and part of the wall remains. The new configuration provides an attractive space for nearby office workers and residents to enjoy it and an alternate path to the Westminster Walkway and Cathedral Square. I can picture events such as Foo Fest taking advantage of the space in the future. It looks like it will be inviting to grab a bite at Taqueria Pacifica and head over there to munch.

Design work is by Durkee Brown Viveiros Werenfels Architects and L+A Landscape Architecture both of Providence and the contractor is Vantage Builders, Inc. of Waltham, MA.

I believe some work will be happening at the One Empire Building which Blue Cross Blue Shield of RI will soon be vacating. 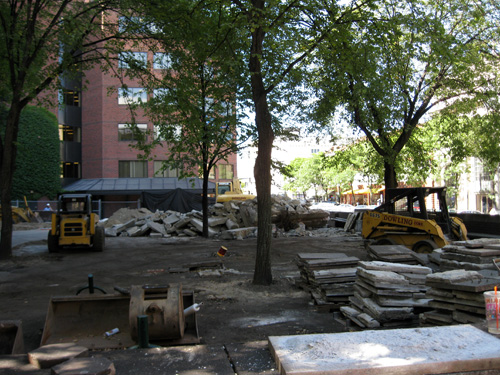