Could the schools help provide needed transit for Downtown?

In the comments section of the post about the Route 195 surplus land redevelopment report there is an interesting discussion (recommended reading) going on about dividing the parcels into smaller lots to create a more granular Downcity-like development pattern in the Route 195 land. Part of that discussion is the realization that we need better transit options throughout the Downcity area to allow for less parking for these smaller development parcels. Current zoning calls for parking densities that are not realistic for smaller buildings to support. Parking can be created off-site, or better yet, we can hope that people will leave their cars at home, but we need good options to move people throughout the Downcity area to make that realistic.

David Segal posted over on Daily Dose about the perennial issue of the city losing out when non-profits expand (as is a large part of the 195 surplus land report).

It sees expansion of the universities as the engine for much of this growth - the city is branding a new “Knowledge District” through much of Upper South Providence (the Jewelry District, Hospitals, etc.). It’s easier said than done, because the interests of the city and state are not aligned: The state sees expansion of non-profits as a boon, because it gets to collect taxes from new income that they generate; the city sees it as a potential burden, as new land gets eaten up without providing new property tax revenue, the city’s major source of income. We desperately need to reconcile this conflict.

We can go round and round on this point. Undeniably, the city benefits in many ways from having the schools here. They provide a large, relatively stable, pool of jobs for the city’s residents, provide income to the city’s restaurants, hotels, entertainment venues and retailers through the influx of students and their parents, and they provide a general essence to the city that makes it much more attractive than many of it’s college-less peers. However, between schools, hospitals, and state and federal property Providence has a vast amount of it’s land that is not generating tax revenue for it. Here I propose one way that the schools and the city could work together to solve an issue for both of them, a way for the schools to save money while providing for the city and a way for the city to reap a benefit.

The map above shows the Brown, RISD, and Johnson & Wales shuttles as well as the RIPTA trolleys that run through the Downcity and Jewelry District. The RIPTA Trolleys started out well. They were designed to provide quick, reliable, inexpensive transportation to a number of the city’s attractions, primarily for visitors. The trolleys linked Brown, RISD, J&W with Downcity, hotels, and other area attractions such as restaurant Row and the Children’s Museum. State budget crisis after state budget crisis, service was cut and fares were increased on the Trolleys. Today they run at headways of a half hour or worse, cost the same as all other RIPTA buses, and according to RIPTA, primarily serve city residents as a bus in trolley clothing.

Meanwhile, the major Downtown schools each provide their own private shuttle services for their students and staff. Brown’s BrownMed/Downcity safeRIDE shuttle runs with 12 minute headways, RISD’s RISD Rides runs into the evening after RIPTA shuts down, and Johnson & Wales’ JWU Ride covers a service area from Federal Hill to the Cranston line. Each school pays for these services on their own, while RIPTA buses are running around on the same streets. Each school also is part of RIPTA’s UPASS program allowing students, staff, and faculty to ride RIPTA buses for free.

The schools can divert the funds (both direct and indirect) that they are using to operate what basically amount to three independent transit agencies to RIPTA, and RIPTA can provide a service that meets the schools needs and is also open to the public providing efficient mobility throughout the Downcity area for Providence’s residents, workers, and visitor.

The schools would benefit in many ways. Currently each school needs to have staff working on running the shuttle systems and all that goes with that. At the same time, the schools have all outsourced other transit to RIPTA through the UPASS program. Putting their shuttles under RIPTA, the schools would dispense with most of the headaches involved in running the shuttle programs. Presumably, there would still be some sort of committee or commission to review the performance of the shuttle system. The schools are land poor and do not have the luxury of building their way out of their parking problems. Streamlining these disjointed shuttle systems into a public service helps all the schools deal with their parking issues. For example, Johnson & Wales has a shuttle to Federal Hill, but Brown and RISD students and staff cannot ride it. So a RISD student living on Federal Hill can watch the J&W shuttle ride by, but can’t get on it, this means the student will be looking to RISD to provide expanded service, service that already exists, but is not available to the RISD student.

The city benefits by RIPTA getting a dedicated funding source from outside the state budget to apply to Downcity shuttle services (government funding would likely still be needed in part). When the Assembly again looks to make cuts to RIPTA, the Downcity service would not get the cut, since a large portion of the funding is not coming from the state. The shuttles would provide the needed service with frequent headways which would make off-site parking and car-free living and working in Downcity possible.

The service I envision is similar to Washington’s DC Circulator. The Circulator has five lines running through DC connecting visitors to attractions with stops that are much more granular than either Metrobus or Metrorail. The buses run at 10 minute headways, cost a dollar, and provide discount or free transfers for those using Metro’s SmarTrip fare-card.

Having a system to move people about the Downtown area makes it more likely that students will feel comfortable leaving their cars at home, that suburban workers will be comfortable take the bus or the T into Providence, and that people living in or on the edge of Downcity will be able to move about quickly and easily without cars. It will assure businesses that they do not need to invest in the expense of building and maintaining parking and allow us to zone for smaller buildings that don’t have minimum parking elsewhere, as the residents and workers in these future buildings will be able to leave their cars elsewhere, or not have cars at all. 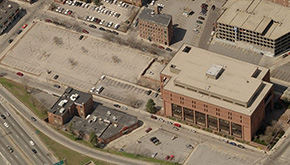 In Part 4 much of the discussion revolved around lot sizes. Comment by Corey Call me naive, but personally, I would take some of the parcels not targeted for institutional use, subdivide them, and then sell the...