So ProJo reported on their blog yesterday and in print today that Struever Bros. Eccles & Rouse has left Rhode Island and pulled out of all projects that it was working on here. PBN however reports that that is not entirely true.

“Like many other real estate development and construction companies, Struever Bros. Eccles & Rouse is working through the complex challenges of these trying economic times,” Struever said in a statement. “While Struever Bros. will have no continued ownership in the future phases of ALCO, McCormack Baron and Olneyville Housing are committed to the revitalization of one of the most important projects in all of Providence.”

“We remain committed to getting our projects moving forward and getting our tenants in,” Struever said.

SBE&R’s financial problems are no secret, a quick look at the Google Machine will return many stories recounting the company’s woes from Rhode Island to Baltimore. Many contractors here in Rhode Island have claims against the company. SBE&R has pointed to the loss of Rhode Island’s historic tax credit and the freezing of credit markets as a major contributor to it’s financial woes.

SBE&R’s largest current projects in Providence are ALCO in the Valley neighborhood and the Dynamo House in the Jewelry District.

The first phase of ALCO is complete with United Natural Foods having moved their corporate offices from Connecticut to ALCO. According to ProJo, McCormack Baron Salazar of St. Louis will be taking over the next two phases which will include 85 units of low-to-moderate income housing and 25 units of workforce housing. McCormack Baron Salazar plans to reduce the amount of market rate housing originally planned. 50,000 square feet of commercial space are slated for the next phases as well.

Dynamo House was planned to be the home of the long delayed Heritage Harbor Museum as well as a luxury hotel property and office space in the former South Street Power Plant along the Providence River.

It seems there is commitment, and least from McCormack Baron Salazar, to move forward with at least some plans for ALCO. The Dynamo House situation is frustrating. With Route 195 coming down, the waterfront between downtown and the Davol Square area will open up, and the Dynamo House could be the anchor of a vibrant waterfront district for Providence. Struever told PBN that the Dynamo House is on hold while the company tries to secure financing for it, but that SBE&R is committed to the project. I won’t be holding my breath, but I really do hope that the project can move forward either with SBE&R or through someone else.

The existing 3-story building on the one-acre lot now houses Vanity Restaurant. That portion of the development will house commercial tenants with the existing 11,000-square-foot structure expanded to 40,000 square feet... 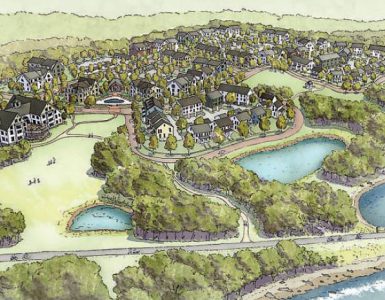 ProJo: Project for Kettle Point, long at rest, on the move

Ian Donnis on his Not For Nothing blog drops a little rumor in his first of a series of posts on the News Apocalypse. Btw, a ProJo source called me yesterday, confident in the belief that J+W had bought the Journal...