I posted about the work on the sidewalks on Dean Street last month. I had intended to head over to Planning to take a look at the plans for the street rebuild, but never got around to it. However, as work has progressed, one of my primary questions has been answered. The intersection of Federal and Dean is being improved: 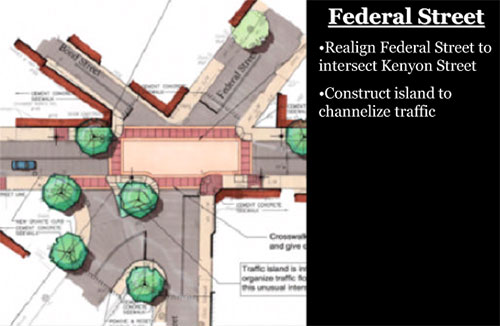 There was some planning done by RIDOT back in 2003 about the Dean-Cahir-Stewart corridor (report here ). Part of that planning was the redesign of the Federal Street and Dean Street intersection (see image above).

In the 2003 proposal, there was a right turn lane from Dean Street southbound onto Federal Street westbound. This is not being built. Though motorist would probably prefer it over having to now make two rights to get onto Federal Street, as a pedestrian I prefer it this way. In the current configuration, pedestrians on the west side of Dean Street have to cross approximately 85 feet of Federal and Kenyon Streets travel lanes, with traffic coming and going from various directions through that 85 feet. This new configuration will greatly reduce the amount of space pedestrians need to cross and the multitude of directions that traffic moves through.

It will also make more sense to drivers, currently Kenyon and Federal both have stop signs, but it is not clear which street has priority approaching Dean Street. I’ve been in cars with many drivers unfamiliar with the intersection who are quite intimidated by it. The new configuration shows drivers that Federal must stop at Kenyon, turn left, then stop at Dean before proceeding. This new configuration should prove to make the intersection make much more sense for both drivers and pedestrians, making both safer in traversing it.