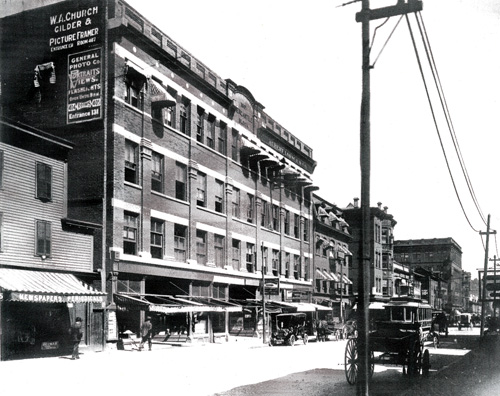 The other day I got to take a tour of the Mercantile Block which is being renovated by AS220. The building will include a renovated retail spaces for Wheels and the locksmith which are current tenants of the building, as well as a restaurant space and a relocated AS220 print shop all on the ground floor. There will also be indoor parking for 20 bikes on the first floor.

[edit: the AS220 print shop and the Fab Lab will actually have space on the 1st and 2nd floors.] The Mercantile Block actually consists of 2 buildings on Washington Street which were renovated and merged into one in 1901. Inside you can see the echo of the two buildings with a brick party wall between the two and a slight difference in elevation on some floors. The project qualified for historic tax credits. In addition to restoring and recreating the Washington and Martha Street facades, the internal stairwells are being restored. Approximately between each row of columns will be where the residences are situated. 22 units with one on each floor being handicapped accessible. Much of the flooring will actually be restored. In some areas, former mercantile functions of the building have left the floors unsalvageable and in other areas, asbestos tiles made the floors unusable, in those areas, replacement flooring will be installed in a way to indicate that it is new. View down to Washington Street: The Martha Street (back alley) side of the building will also be renovated to as close to historical accuracy as possible. The facade near Wheels was actually covered over and much of the old detail was able to be determined under the coverings. Martha Street will be rebuilt, however it will have no outlet since it has been abandoned at the far end in anticipation of the Hotel Sierra project. There is the possibility of Martha Street being activated for outdoor sales and such. The restaurant will pass through from Washington to Martha and outdoor seating on Martha is possible.

The brick will be cleaned and repointed and should look much like the brick seen hear on the left on the Dreyfus Hotel building: The basement will feature offices, music rehearsal spaces, and other uses. Headroom in the basement just met minimal height to allow for occupancy, but the floors were lowered to give a more comfortable headroom. Up to a foot of dirt was removed and some large boulders had to be dealt with. Bottom of the column is the original floor elevation. The facade facing the proposed Hotel Sierra will have all the windows filled in in anticipation of hat building’s construction (someday). Hopefully in the interim AS220 will do some more mural painting on this facade. The project is scheduled to be complete next October, though some of the new ground floor retail locations will begin opening sooner (Wheels closes in January for renovations). The plywood has come off the ground floor facade of the Mercantile Block on Washington Street. Clark the Locksmith will be moving into one of the new storefronts very shortly, then his storefront will be renovated to...

AS220 Mercantile Block Sneak Preview Sunday, June 6, 1pm-3pm Enter at 131 Washington Street AS220’s new live studios ar the Mercantile downtown Providence are expected to be ready by the October. If you are...

The Providence Journal has an article about how AS220’s Mercantile Building downtown is eventually going to become the latest outpost of MIT’s Fabrication Technology Laboratory. The article is linked here...