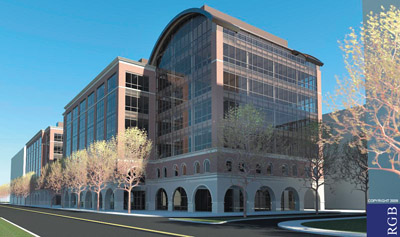 As the intermodal station at T.F. Green rapidly works towards completion, expecting trains to arrive next year, it is already spurring development in the area in anticipation.

Michael D’Ambra currently owns an asphalt plant adjacent to the train station which he plans to turn into a $300 million hotel and office complex. In addition to the asphalt plant, D’Ambra’s construction company is headquartered at the Jefferson Boulevard site.

The Journal reports that last night, D’Ambra received final approval from the Warwick Planning Board for his proposal. As the Warwick Beacon reported earlier this month, the plan calls for three 7-story office towers with 540,000 square foot of space and a 320-room hotel with direct access to the intermodal facility skybridge, which connects the train station to the airport terminal. The development will also feature retail space. Though D’Ambra now has permission from city officials to move forward, the multi-phase, multi-year development will not commence until there are a enough tenants signed on, and is also contingent on the asphalt plant being moved to Johnston (which has approval from that city).

The Planning Board gave D’Ambra relief on both height and setback restrictions, which allows the project to be built to the street and have a much more urban look and feel. With the Planning Board willing to give variances that make sense from an urbanist streetscape perspective and a number of other hotel, office, and residential proposals in the pipeline, the intermodal station area looks like it could yeild a true transit oriented village near the airport.

The city needs to be vigilant of creating a truly urban village and not a facsimile of urban form without the function. This building being set on the street is a start, though the developer’s lawyer was very excited when speaking to the Journal about how no one need ever go outside here:

K. Joseph Shekarchi [told] Planning Board members that “one of the best things about this project is that you’ll be able to leave your office or hotel room and get in a car or (catch) a flight to Florida without ever having to carry an umbrella or put on an overcoats.”

OK, yes that is good, I’d certainly be happy to leave my plane cross the skybridge and be in my hotel (or board a train, he seemed to forget that it was attached to a train station too). But in order to have a truly transit oriented village in this area, people need to be able to go outside. People in the offices should be able to walk to lunch and other shopping areas. Residents of future develpments will want to walk to the train station to get into Providence and Boston and walk to RIPTA buses that will serve the station. Bikes need to be considered as one of the modes. A development which is a series of skybridges that people drive to is not what should be the result of the investment the state has made in this train station. Warwick has a chance to be a national leader with the airport district and the smart development of it. Let’s hope officials in our neighboring city understand the opportunity they have and make the best of it.