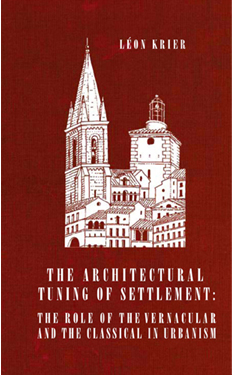 Leon Krier is one of the most influential architects and urbanists practicing in the world today. In lectures, writings and design projects, he has developed a vision of traditional form for human settlements for contemporary society. In his latest book, The Architecture of Community, he provides a contemporary road map for designing or completing today’s fragmented communities. The book contains descriptions and images of the author’s built and unbuilt projects, including projects in Seaside, Florida, as well as the town of Poundbury in England, which was commissioned by the Prince of Wales in 1988, and has become a model for ecological planning and building. He has taught architecture and urbanism at the Royal College of Arts in London and at Princeton and Yale universities, among other institutions. In 2003, he received the inaugural Richard Driehaus Prize for Classical Architecture.

This lecture is presented by the New England chapter of the Congress for the New Urbanism in partnership with Brown University’s Department of Urban Studies and Department of Architecture Studies. Sponsorship provided by Cornish Associates and Donald Powers Architects. The lecture will be followed by a book signing of two of Leon Krier’s books The Architecture of Community and Get Your House Right: Architectural Elements to Use & Avoid. For more information, visit: www.cnunewengland.org.

Free and Open to the Public
Space is limited. RSVP at http://leonkrierlecture.eventbrite.com