A look at streetcar rail placement 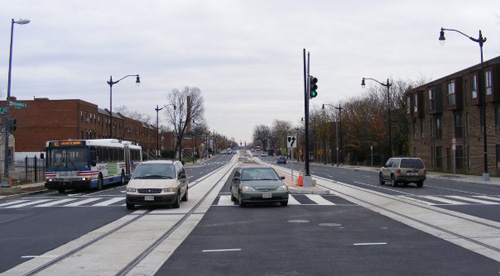 Photo from District (of Columbia) Department of Transportation Facebook page

As we get serious around here about getting some streetcars running, we should start looking around at what other cities are doing.

No concrete plans of exactly how the rails are going to be laid in the streets have been done yet for Providence, the actual routing is not even nailed down yet. We’ll be spending lots of time working these issues out in the coming months and years. While we start to tackle these issues, The Transport Politic takes a look at the Benning Road streetcar line in Washington, DC and finds it’s design lacking.

Graphic of the Benning Road streetcar tracks in Washington, DC from The Transport Politic

This raises questions about the value of streetcars in general | wouldn’t it make more sense to operate these trains more like light rail? Cities could do just that simply by installing cheap ground-level barriers between streetcar and car lanes, and eliminating the left-turn lanes to the left of the streetcars (or moving the trams to the outside lanes), all while instituting aggressive signal priority. These approaches would dramatically improve the efficiency and speed of streetcars and provide them a relative advantage over automobile traffic, which would be limited by fewer travel lanes than before, ultimately leading to more public transportation usage. That’s a valuable goal.

In the limited area in which our starter streetcar line is proposed for, this geometry is not terribly likely, except for perhaps the small portion between the hospitals and Davol Square along Eddy Street. It does raise an important question for our future planning though. Are we going to design our streetcar routes to avoid inconvenience for drivers, or are we designing streetcar routes to move passengers on the streetcars first and foremost? I think as we start zeroing in on the exact routing and figuring how the tracks will be laid in the street, this is important for us to keep in mind.