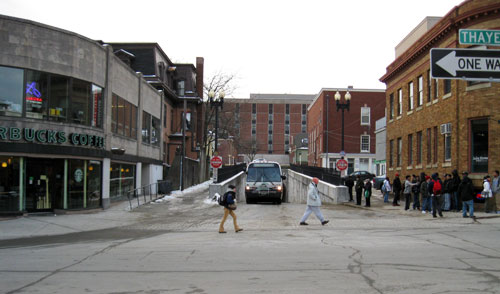 Last month I looked at some options for what a new transit sub-hub with streetcars could look like on College Hill. After some discussion in that post, and off-site, reader Peter Brassard has created some CAD drawings of some options. 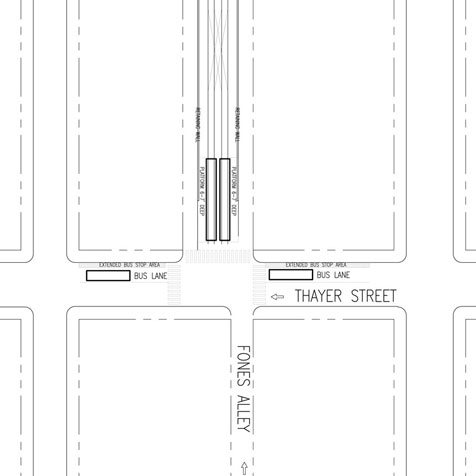 The first option keeps the streetcars in the tunnel portal with a switch to allow them to change directions inside the tunnel. The buses move back outside the tunnel to platforms for inbound and outbound service on Thayer Street on either side of the portal.

A drawback to this is the streetcars are changing tracks inside the tunnel blocking other bus traffic while the switch is made. The switch should be able to be made relatively quickly, but it is cumbersome. 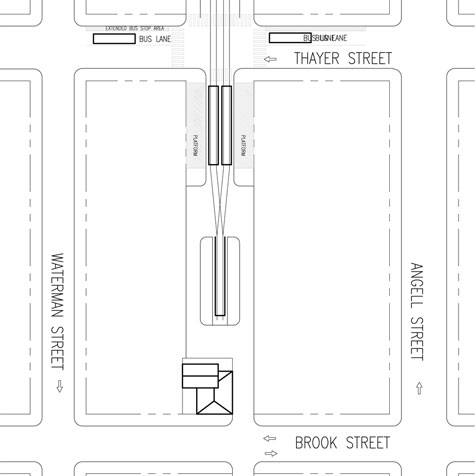 In option 2, the streetcars leave the tunnel, cross Thayer and have platforms across the street. This option requires the removal of the strip plaza at the corner of Thayer and Waterman to make room for the rails and platforms. That removal would require eminent domain unless the owners were willing to sell. The strip plaza is poor urban form with parking between it and the street and that parking lot creates a pedestrian safety hazard now. 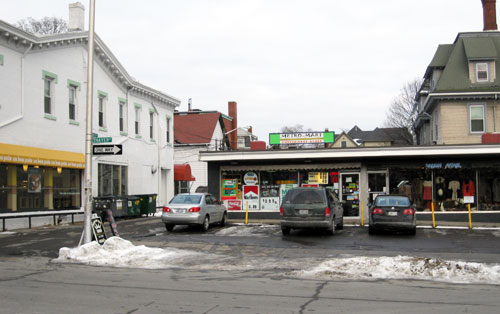 This strip plaza on Thayer Street will need to be removed to make way for a Fones Alley Transitway. Photo by Jef Nickerson.

The buses continue to utilize platforms on Thayer Street. Buses could I suppose stop in the tunnel portal the way they do now, but this would force streetcars to wait behind buses letting off passengers.

The streetcar line dead-ending in Fones Alley means that any future extension of the streetcar line may require the abandonment of this infrastructure. Though it could still be put into use for streetcars that do a short run in the future or as storage. Residents of Allston, MA may remember the Brighton Avenue stub at Packards corner being used to store trolleys before that stub was removed. 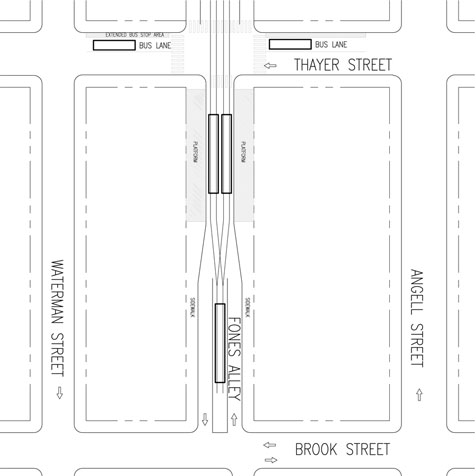 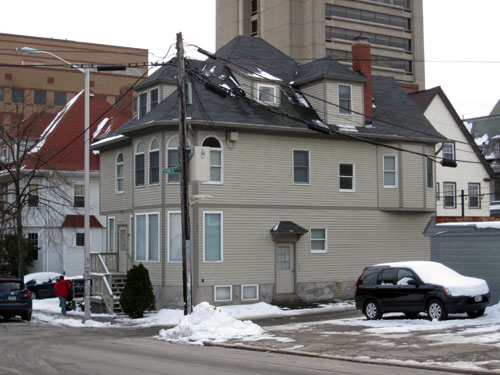 This house at the corner of Fones Alley and Brook Street would need to be removed to make way for a transitway through-block from Thayer Street. Photo Jef Nickerson

In addition to the house which might need to be removed, there are other access issues to be addressed if Fones is to be made a transitway. 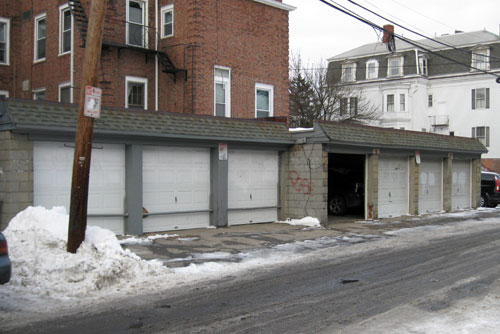 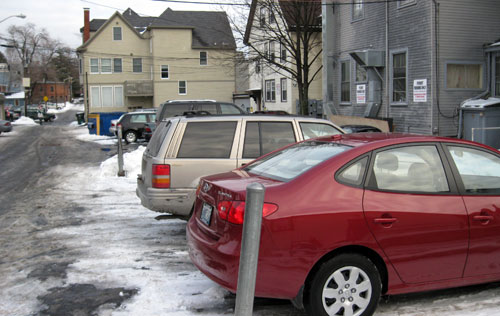 On the other side of the alley we have this surface parking behind the buildings fronting Waterman Street. Now, perhaps if the property lines work out right, there is room for the transitway and the property owners could be told they are S.O.L. on accessing parking any longer. However there is currently an alley behind the strip plaza which runs out to Waterman which could be put into use to access this surface parking. 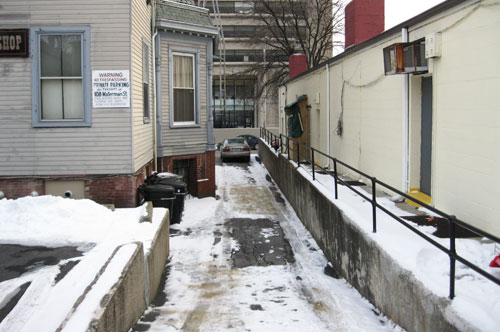 In a perfect world of course, the people who park here would renounce their cars and turn these parking spaces into lovely gardens.

Extending the transitway through-block allows for longer platforms allowing for more than one vehicle to be boarding at a time. The center track for the streetcars to change tracks is moved back. Access for buses is allowed from Brook Street.

Bus platforms remain at Thayer Street as in the other options. Peter’s measurements indicate that buses would have trouble making turns from and to Angell and Waterman onto Brook and into the transitway. 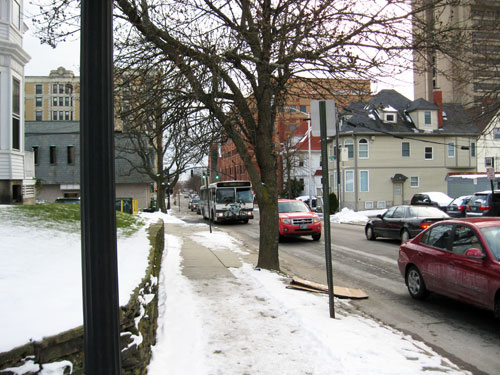 I think some re-engineering of Brook Street will fix this issue and allow buses to utilize this transitway. Brook has a bit of room to make it slightly wider, sidewalks can be pushed back on the east side of the street. It might also help to make Brook be one way northbound (Thayer is one way southbound) with a southbound transit only lane as far as the transitway. Making the street one way reduces the number of cars in the intersection between Angell and Waterman and controlling one way traffic would be simpler from an engineering standpoint. 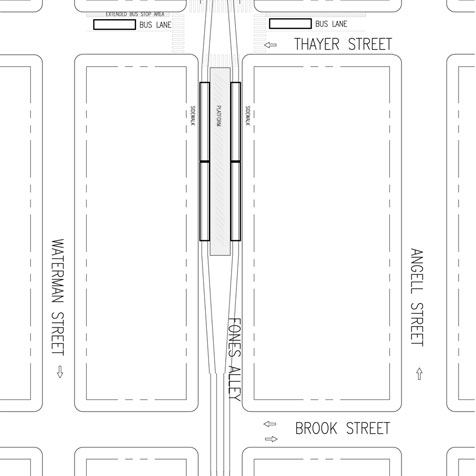 The 4th option features a central platform in the tranistway and looks at the streetcars continuing along Fones Alley to Hope Street, at which point they would return to the streets. The extension through to Hope presents issues of many more abutters utilizing the alley. That portion of the transitway would have to be open to these abutters. Even with the abutters using the alley, streetcars will be able to better use the alley without interruption than they would Angell and Waterman Streets. 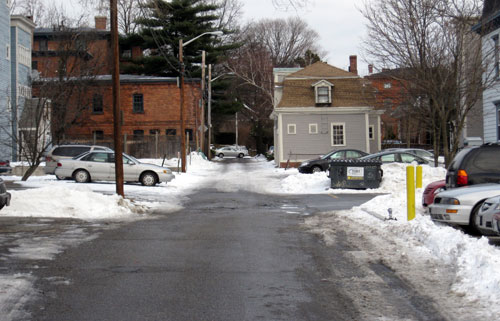 UPDATE: Peter sent me drawings for the “Loop” option discussed in the comments below, let’s call it Option 5: 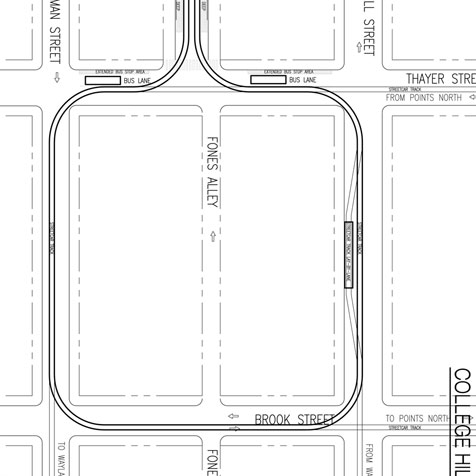 In this option, streetcars would come through the tunnel with platforms either at the top of the tunnel portal, or platforms on Thayer Street just outside the tunnel. Streetcars would loop Waterman to Brook to Angell, back to Thayer and into the tunnel. A siding would need to be created somewhere on the loop to allow streetcars to lay over. Future expansions would be possible eastbound along Waterman and Angell and northbound along Brook and Thayer to Hope.