The Intermodal Project is now approximately 65% and on target for a Fall 2010 opening.

Escalator installation at the TEI

Escalators were dropped through the roof of the building and have now been installed in their permanent positions from the first to the fourth level. Elevators at the TEI site being installed work continuing throughout January. The bridge ceiling has been sprayed with cementitious fireproofing. Ceiling ductwork, fan coil units, and overhead hanger rough-in work are now taking occurring. The stair tower is now receiving metal panels and curtainwalls are being set in place. 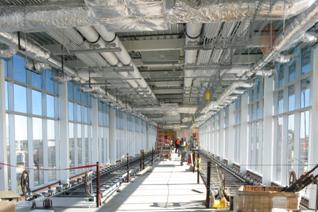 A view of the moving sidewalk installation

The moving walkways’ installation and assembly is continuous. Stanchions are being aligned and leveled by laser at walkway sections 1, 2, 4 and 6. Electrical distribution is being wired from the electrical room located in the walkway’s “knuckle” to the curtainwall light fixtures. Insulation is being hung at various points throughout the skywalk. The ceiling and mechanical equipment continues to be painted white in increments. Glass installation at the knuckle began in December and continues.

A view of the skywalk connection to the CSO

Final detailing of the CSO building exterior was completed in December. Permanent light fixtures for the first floor are now on site. Permanent mechanical equipment and electrical power are near completion and the heating system should be ready for “start-up” in January. The curtainwall is being hung on the “Connector Bridge” between the CSO building and the Garage. Exterior metal panels are also being installed. The doors connecting the CSO to the Skywalk and the Connection Bridge have been framed and will remain temporary as construction continues in this area.

The garage spanning the train tracks

Foundations at stairway 7 were formed and poured in December. The precast garage was also erected and detailed. Stair 1, along Jefferson Blvd., was installed as well as doors and hardware at the Electrical rooms. Fire protection piping and permanent power distribution were ongoing processes in the garage. Several light posts were raised on the 6 floor. The elevator pits on the east side of the railroad tracks have been waterproofed. The 3, 4, & 5 level fueling canopies at the fueling platform have been installed. All three of these levels also now have fuel pipe transition sheds installed. The concrete pilings for the shoring system have been poured in preparation of setting the fueling tanks.

This update was released earlier in the month, we are just getting around to posting it now though, oops! An aerial view of the Intermodal project. The Intermodal Facility is 78% complete and on schedule for opening in...

April Construction Update Construction of the Intermodal Facility is 78% complete and on schedule for opening in Fall 2010. Remaining work will focus on finishes such as framing, painting, etc. as well as final...

From RIAC December Intermodal Update The Intermodal project is at 64% complete, on schedule and within budget. Project highlights to date include the completion of the curtain wall spanning the length of the skywalk...