In the media we’ve been hearing a lot of talk about solutions to these flooding issues. People in areas prone to flooding wanting solutions from the government, etc. The fact is, there isn’t really a solution. If the Pawtuxet or other rivers want to leave their banks, they will.

But that does not mean there are not ways to mitigate the impact and severity of floods. Look at this table of the historical crests of the Pawtuxet River:

Seven of the top 10 crests are in the last 10 years (the top 2 being this month). What is causing the river to flood so high now? I suspect that it is a combination of climate change and development in the river’s watershed. On the climate front, we just got 10 inches of rain in 2 days. That is obviously not normal. Will it happen again soon? Probably not. Thinking back over the storms we’ve had over the last decade, will it be another 50 or 100 years before it happens again? Maybe not. Climate change experts have been predicting larger, wetter storms for our region, and it certainly feels like those predictions are coming true.

On the development front, well, we here on this site quite like dense urban development. The key problem with the development patterns in the Cranston and Warwick areas is the dependence on the automobile is causing us to pave wide swathes of the landscape. That pavement prevents water from soaking into the soil and sends it all flowing directly into the river. Look at the video above, now look at this aerial image: 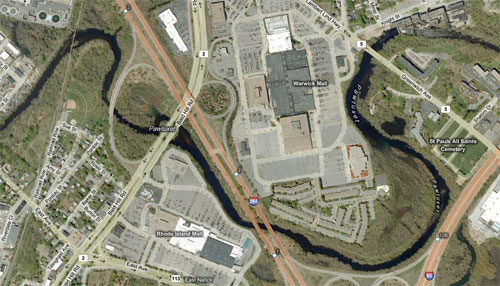 The river has nowhere to go, the mall parking lots just send the water straight into the river and when the river rises, it can’t soak into the land to dissapate the flooding. Head east and north of here and you see more pavement.

Another area the news crews seem to be liking to go to and measure the water is this Stop & Shop Shaw’s on Warwick Avenue: 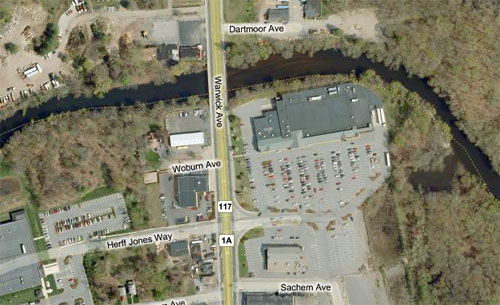 There’s a parking lot right on the river. The question has to be asked, who approved this land use? The physics isn’t too hard, when you pave the riverbank, the water can’t soak in. It is not just the pavement along the river. The more areas in the watershed that are paved, the less land is available to soak up the water, and the more water heads into the river, causing it to rise. We have acres of paved land devoted to parking in the watershed, up and down Route 2, along Jefferson Blvd., Post Road, Pontiac Avenue…

So what is the solution then? We could just unbuild everything and turn it back over to nature. That is not terribly realistic of course, but not totally out there. There have been lots of residents who have been getting wet every year (look at the crest table again, then imagine you live next to the river), who seem to have had it. They want out, but they can’t sell their homes in the flood plain. Who would buy them?

Who indeed? Well, the Feds are set to give us a bunch of aid money to help homeowners and businesses recover. Many of these people though don’t want to rebuild, they see the writing on the crest table. The Feds should start buying these people out, and helping them to move, not helping them to continue to be flooded year after year. How many people are receiving their seventh federal assistance package this decade? Couldn’t we have just built them new houses with the aid they’ve received thus far, not to mention the aid they’ll surely need over coming years as the river floods again and again?

The towns need to change their zoning. Never again should a Stop & Shop Shaw’s or anything else with a giant parking lot be built on the banks of the river. The towns also need to look at parking requirements in the rest of the watershed. Drive up Route 2 and you see strip mall after strip mall, each with their own parking lot, each designed for maximum Christmas Eve capacity. These massive lots sit largely unused most the year, simply shedding water into the river. The towns should force developments to share parking lots and restrict the size of the lots. Also, parking lots need to have water collection systems such as bioswales that do not feed water into the river.

Aid packages can also be used as a stick. Warwick Mall is seriously damaged. There is standing water inside the mall. They are going to need substantial investment to get the mall up and running again. Should we make the aid contigent on the mall doing something to mitigate their parking lots? The mall could build a parking deck at the north end of their property and turn the lots on the southern end back over to nature. Engineer the land so the river can soak into it when it rises, which would mitigate flooding further downstream.

The Rhode Island Mall… well, isn’t it time we just get rid of the Rhode Island Mall? It is almost vacant, and has acres of parking doing nothing. It could also be turned back over to the river. A passive recreation area designed to flood when the river runs high. Yes, someone owns it and someone would need to be compensated to remove it, but let’s figure out a way to do that.

Better transit and better bike infrastructure will also help us reduce our dependence on autos and our need for places to park them. There is much employment in the area, but look at Jefferson Boulevard for example. Jefferson has acres of parking and has been heavily impacted by this week’s flooding. RIPTA Route 8, which serves Jefferson Boulevard, only has 7 roundtrips per day. How many parking spaces could be removed if bus service was more frequent to the area?

And let’s not think I’m just picking on the suburbs here. Providence was not impacted as hard by the flooding, but the residents and businesses in the Valley Street, Eagle Square, and Kinsley Avenue areas will tell you we did not get away unscathed.

The Woonasquatucket is indeed very hemmed in by development and parking lots. The old Price Rite and Atlantic Mills in Olneyville, Eagle Square, ALCO, and more have paved land contributing to river flooding. Like the Rhode Island Mall, the old Price Rite could be removed and made into passive recreation land designed to flood. Bioswales and other catchements need to be built throughout the city to collect water before it reaches the river. And we should be giving serious thought to the residents and businesses of Tuxedo Avenue and Amherst Street. Do they keep flooding, or do we de-populate that area, or can other mitigation help remove, or at least reduce the flood threat? I’m not sure what the answer is, but we can’t keep bailing out, both literally and financially, year after year. 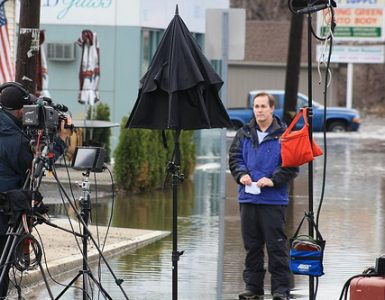 Looking back at the Floods