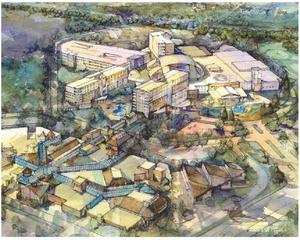 Truth be told, I’d rather we not have any casinos in New England. But I have said in the past, if Rhode Island were to legalize casinos, I would want to see one built in Providence rather than expansion in Lincoln or a new casino some place like West Warwick. People in Lincoln will already tell you they’re not too keen on Twin River’s traffic and noise, and that isn’t even a real casino (yet). I’d prefer the traffic and noise and other problems attached to a casino confined to the city, which can site a casino in a district suited to 24-hour use, and also hope that the casino has a positive effect on the city’s hotels, restaurants, and shopping. A casino outside Providence guarantees that people would leave Providence or never come to Providence to begin with.

Basically, my feelings are spelled out in this post by Lefty on A View From Battleship Cove. Lefty compares the proposal by the Wampanoags for an all-inclusive resort style casino on 300 acres of land at the edge of Fall River, on a site off Route 24; against a proposal by a private developer for a casino situated right in Downtown New Bedford which intends to funnel it’s patrons out into the downtown area.

It seems inevitable at this point that the casino debate will come back to life in Rhode Island at some point. With expansions at the Connecticut casinos and the likelihood of casinos in nearby Massachusetts, our state’s dependence on gambling as a major source of our revenue will be in danger. I’d prefer we diversify our economy and ween ourselves from the gaming teet, but the question will be asked again. So let’s discuss it now. If full scale casino(s) were legal in Rhode Island, where would you want to see one built and why?

If we MUST have a casino

Massachusetts has approved casino gambling. If Rhode Island were to follow suit, where would you want our casino to go?

Mass. Senate approves bill licensing 3 casinos [ProJo] The bill includes an ammendment allowing Fall River to develop a casino on 300 acres of land at the northern edge of the city. Here in Rhode Island, Gordon Fox is...