RIPTA gets $700k in federal funds for new bus hubs 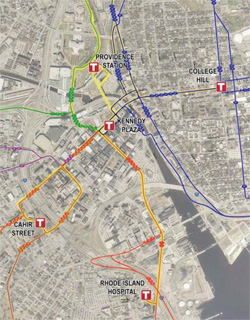 The Federal Transportation Administration announced who is receiving $290 million in TIGER funds for “Urban Circulator/Bus and Bus Livability Projects.” Rhode Island is among the recipients with $700,000 going to RIPTA to develop bus hubs outside the Downcity core.

The Sub-hubs, as we’ve been calling them here, are a recommendation of the Metro Transit Study.

With new smaller hubs, taking the bus will take less time. Extending RIPTA bus routes beyond the primary downtown destination of Kennedy Plaza to other hubs just outside of downtown will eliminate the need for many passengers to transfer to reach their final destinations. In this plan, RIPTA will develop new hub locations in the West Side, College Hill, Capitol Hill and the Hospital District areas. These will attract riders because trips will be more convenient, accessible, and highly visible in new key locations. Additionally, dispers- ing waiting buses to these new hubs will help the reinvention of Kennedy Plaza by decreasing its congestion.

The Metro Transit Study estimates that it will cost $5,454,000 to complete all hubs, located on the West Side, College Hill, Providence Station, and near the hospitals. However Phase 1, which includes bare-bones amenities at the West Side and College Hill Sub-hubs and through-routing of buses to these hubs is estimated to cost just $200,000.

RIPTA will begin Phase 1 by continuing to develop the first such hub located on Cahir Street on the West Side of Providence near three Providence High Schools. This hub will include amenities such as new bus shelters, map and schedule information, bike racks, and in the long term real-time arrival information, public art to relate it to its local neighborhood, and new branding of bus service. Phase 1 will also include extending the 49, 52 and 90 routes to the West Side and providing a similar hub on College Hill as part of the extension of routes 55 and 66.

The real-time arrival information is part of RIPTA’s Intelligent Transportation System (ITS) which will allow RIPTA to feed information about where buses are to bus stops, mobile devices and more. The ITS is currently under development.

Of course all of this will be for naught if the state does not do something to address RIPTA’s funding problems.