A ribbon cutting ceremony will be held at Kennedy Plaza on Monday, October 4th at 11am to intriduce RIPTA’s new hybrid buses and hybrid trolley buses.

The new hybrid diesel Gillig buses and trolleys are powered by clean diesel hybrid electrical propulsion systems that reduce emissions, save fuel and are smoother and quieter than conventional buses. This not only reduces air pollution, but noise pollution as well, thus improving the environment for Rhode Islanders. 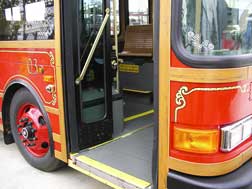 The red and gold trolleys, which each seat approximately 30 passengers, will replace existing trolleys on the Gold and Green LINK lines in Providence. Each trolley, manufactured by Gillig Bus in partnership with Cable Car Classics, costs $696,959.50. Federal Transit Administration Grants funded the base cost of the trolley, while the American Recovery and Reinvestment Act (ARRA) covered the incremental cost of the Hybrid Propulsion System. A 20% local match was provided by State General Obligation Bonds. The trolley includes Gillig heavy-duty reliability and ADA accessibility wrapped up in the appeal of old fashioned trolley charm.

These new buses and trolleys are part of RIPTA’s normal fleet replacement plan to maintain their fleet in top condition. Replacement of CNG trolleys and diesel buses to a hybrid system will yield approximately a 20% savings on fuel for RIPTA.

The new buses and trolley buses will be joining the fleet in stages through March of next year.

The above video highlights a new electric bus developed by Waseda University being tested in Japan. The bus runs 25km (15.5 miles) on one charge, takes 15 minutes to recharge, and the batteries cost approximately...