Yes, yes, I know. Providence is not New York, it is hard to compare. But all of these initiatives are things that can and should be scaled to Providence.

Look at this Times Square statistic again, there was a ten-to-one ratio of pedestrians to cars, yet 90% of the space was devoted to cars. No place in Providence is Times Square, but places like Atwells Avenue, Thayer Street, Kennedy Plaza, Elmwood Avenue, Broad Street, etc. are certainly given over more to cars than to the pedestrians that actually are using the space.

The biggest take-away for me, is that these changes have happened in 3 years. I attend a lot of meetings around the city and I am seriously to the point now where I feel like we have too many meetings, too much public input. We’re taking in circles at this point. When the loudest people showing up to the meetings are the ones that will never be happy with anything, it is no wonder we never get anything done. Of course, it would help a lot if agencies like RIDOT would actually present palatable plans from the get go, and if rules and regulations were actually enforced so we did not all the time feel like we had to come out and fight against things.

That talking in circles and getting nowhere is changing a bit though, the Pedestrian Bridge is on a major fast track schedule, and the Core Connector Study is also moving along rapidly. Both of those projects have external forces making their schedules move. The ped bridge needs to be done within the timeframe of the Iway project, and the Core Connector Study in part has use-it-or-loose-it stimulus money.

Let’s hope our next Mayor, like Bloomberg has done in New York, can present and sell a vision and can engage the people who want to see change, so that the naysayers are not the ones monopolizing public discussion, so we can get some stuff done around here. 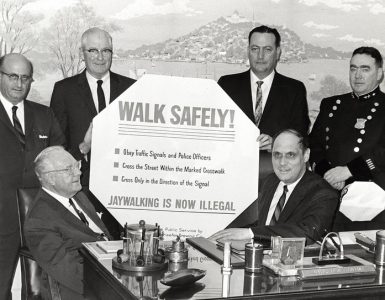 In 1909, "jaywalker" was an obscure Midwestern colloquial term that referred to a country hick in the city who got in the way of other pedestrians. But with the rise of the automobile, people connected with the auto...

Sidewalk over street in Providence too

An example of pedestrians have priority over cars, right here in Providence.

Tootling [The New Yorker] “At twenty [mph], you’d actually save time,” King said. “Going forty miles per hour doesn’t change your position in the next queue, at the next traffic lights...