All at once, or slow and steady. How to develop the Route 195 land?

Rendering by Kohn Pedersen Fox via The Architect’s Newspaper

Seemingly (and perhaps literally) since before I was born, Boston has been attempting to redevelop the area across Fort Point Channel from downtown. The Fan Pier area and what is now being called, Seaport Square. Over the decades plan after plan has been proposed and approved only to fall through.

To be sure, some development has indeed happened in the Seaport District, the new Convention Center, associated hotels, office buildings, the new home of the Institute of Contemporary Art, the Federal Court House at Fan Pier, and more have all been developed in the last 20 years. And the city still persists in trying to get some large scale masterplan off the ground for the largest parcels that sit between the city’s core and the nascent development that has occurrured more organically so far.

Boston’s Mayor Menino is billing the Seaport District as an “innovation district,” just as Mayor Cicilline is proposing a “knowledge district” on our city’s Route 195 land and through the Jewelry District. The Seaport District is also touted as being a nationally unique opportunity for the redevelopment of so much land so close to an existing urban core, sound familiar?

Though no architects have been chosen yet, the first phase is slated to start in late 2011 with apartment buildings and an Innovation Center incubator. The Master Plan approach has allowed the city to look at the neighborhood holistically and decide what ingredients were important, such as pedestrian connections and open space. But as anyone who knows Boston will remind you, we’ve been here before, many times over the last quarter century.

While the plan’s approval is encouraging, city officials are wary of getting left with acres of vacant sites should the development stall out. Indeed, Boston Global Investors CEO John Hynes III played a lead role in a condo and office tower on the site of the former Filene’s department store in nearby Downtown Crossing|a project that notoriously stalled after demolition and excavation in 2008. According to BRA director John Palmieri, the authority has since made final approval of developments contingent on a confidential review of project financing.

Though I’m not painting a pretty picture of the masterplanned approach, that is the question for discussion here. With our economy still possibly years from solid recovery, should we spend that recovery period working on a masterplan for the Route 195 land, or do we want a more organic approach, as each parcel is developed, we review it individually, and figure out how best to fit it into what has been developed prior? 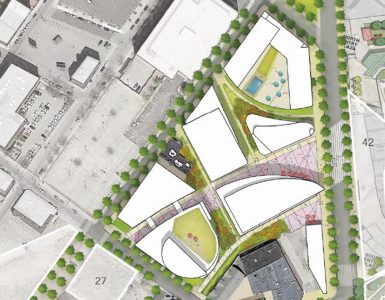 The developer preparing to renovate the old South Street Power Station near Davol Square into nursing schools, university offices and apartments proposed buying a nearby parcel of former Route 195 land for as much as $2...

Greater Boston takes a look at and hosts a discussion about Liberty Wharf.