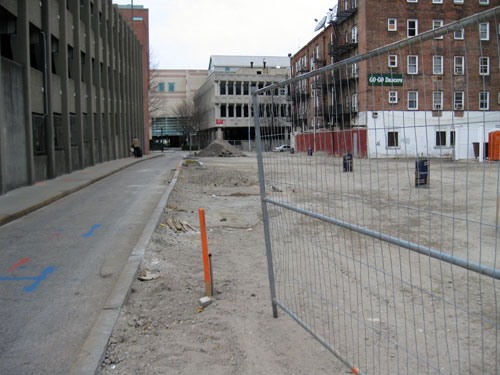 The crews that were using the lot where New Japan, Cuban Revolution, et. al. once stood and as a staging area to work on the AS220 Mercantile building have barely had time to clear out and; wham bam, there’s a parking lot.

The lot was cleared back in 2008 to make way for the Hotel Sierra. Then pretty much the next day the Great Recession set it, sigh. So it has sat. It was being used as a staging area for the AS220 building construction, now that that is over, parking!

We’ve been talking about this ad nauseum, but our regulations still make parking an approved use, so here we are. I can’t say there is any such thing as a good parking lot, but there are ways to make them less bad. 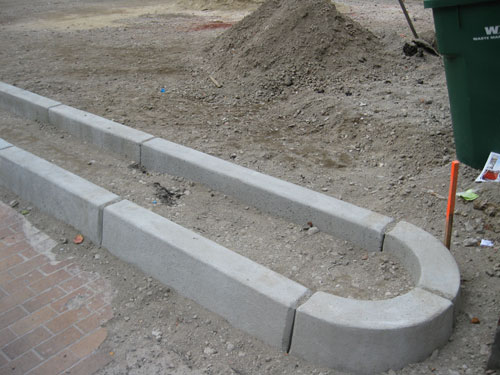 This lot isn’t being less bad. See that curb creating a Dunkin Donuts cup collector landscape strip. First of all, could it be narrower? There are provisions for how wide a landscape strip needs to be on an ‘A’ street (which Washington is) and that strip looks to meet it to the millimeter. It couldn’t be a touch wider? But what really bothers me is the curb itself. 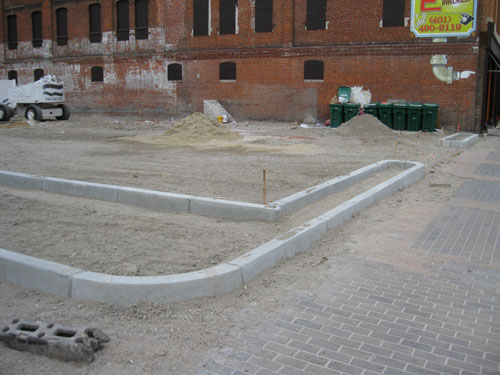 Are we really giving this lot another curb cut? There is no curb cut here now. Why can’t the lot have an entrance off of Beverly Street? So the sidewalk is going to have a curb cut for this lot, for Beverly Street, and for the parking garage, all right on top of each other. There’s also a new curb cut for this lot on the other side of the block onto Fountain Street. The city loses street spaces by allowing these curb cuts.

Another new parking lot, which I meant to write about here months ago is at the corner of Eddy and Weybosset Streets. You might know that location as where the Downcity Diner used to be before it burned down. Most recently is was the site of the proposed Smith-Mathewson Building. A small liner building which was to front Weybosset Street.

Back in September I was walking by the site and saw a parking lot being built. 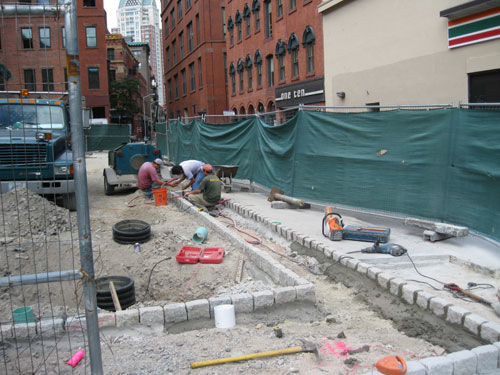 Sadly I was not terribly surprised. The project clearly was not moving forward. However, a parking lot is not an automatic right, especially not on an ‘A’ street. I talked to a friend on the Downcity Design Review Committee, that person said the committee had not approved parking and it was their understanding that the DRC would have to approve it (and the DRC would likely have some hefty conditions on approval). So I contacted the Planning Department and this is what they told me (emphasis mine):

A few months ago, Stanley Weiss told us that he could not get financing for the liner building and wanted to build out the lot for parking until a building was financially feasible. We pointed to the provision in the zoning ordinance that prohibits a surface parking lot in the Downcity District unless it is shielded from an A-Street by a building (like what he had proposed). So instead of seeking a variance for a permanent lot, Weiss opted to petition the director of the Dept. of Inspection and Standards for a two-year temporary parking lot. The director has apparently approved this. The zoning ordinance does not require Downcity Design Review Committee approval of temporary parking lots.

THE HELL!? The Department of Inspections and Standards can just wave a wand and invalidate the Zoning Ordinance. They don’t have to consult DRC or the Planning Department, you know, the people tasked with how the city is built?

Why do we have a Zoning Ordinance and why does it say you cannot build a surface lot on an ‘A’ street if the Department of Inspections and Standards is just going to say, “sure, go ahead?”

Here’s the thing. If the applicant had gone back to DRC, DRC likely would have allowed some form of parking as a “temporary use.” However, DRC would have wanted concessions. How about creating a landscape buffer that was the size of the footprint of the proposed building, rather than the little piddly weed strip which is the minimum requirement? The lot behind the liner building was to be parking as originally proposed. If they had enough parking with a building there, then they should need less parking without one, so the amount of parking they proposed, should have been sufficient. The area where the liner building was to be need not be parking, it could be landscaping, a sculpture garden, food carts”¦

(Also note, curbs again. No runoff will be able to make its way into that landscape strip. Had DRC reviewed this, someone on the committee might have had to the forethought to notice that and require no curb.)

It could have been nearly anything other than a parking lot. And if the applicant wouldn’t agree to that, DRC could have just said, “no, you get nothing, keep the lot clean and empty.” We needed the applicant to go back to DRC to force these concessions though. This running to one parent (Inspections and Standards) when the other parent (Planning) says no, has got to stop.

[box style=’red’]Update 11/29: The Planning Department contacted me with some clarification about the Parkinglotification process. A temporary, 2-year parking lot is an approved use in Zoning, without DRC approval per Zoning Code 502.5 F:[/alert]

Transitional Uses: The intent of this Ordinance is that new construction shall immediately follow demolition. Therefore, unless the applicant can demonstrate that through no fault of its own, construction cannot immediately follow demolition, no transitional uses shall be permitted. Should the Director find that there has been a delay in starting new construction, due to no fault of the applicant, the Director may permit a transitional use for up to one two-year period, or until a building permit is issued, whichever comes first. Notwithstanding the other provisions of this ordinance, a transitional use may include a surface parking lot, but the parking lot must be landscaped in conformance with Section 502.2 D) and E).

The “Director” in this case is the Director of the Department of Inspections and Standards. This language was added to the Zoning Code in 2004.

The Planning Department objected to the language at the time and hopes to remove it when rezoning takes place after the adoption of the new comp. plan, which should be happening soon. We have a brandy new City Council and a brandy new Mayor coming in in January and it is never too early to contact those people and let them know that you support removing the provision for “temporary” parking from the Zoning Code.

Downtown Providence Living Tour Saturday, May 8th, 12|5pm Tour lofts, apartments and condos in downtown Providence, the heart of the Creative Capital! This year, our tour will highlight several new properties, along...