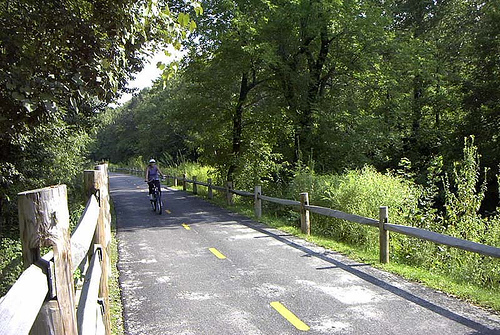 Last month Matthew wrote about the proposed on-road connection between the Blackstone and East Bay bike paths. Now we have the draft plan from the city of Pawtucket detailing part of that connection.

There are some caveats right now to these plans. The section between Pitman Street in Providence and the Town Landing in Pawtucket is not included in this document, that is a separate RIDOT funded project. The current plan shows the route running along Taft and Pleasant Streets in Pawtucket which are both closed (or will be closed at various dates in the future) due to the Pawtucket River Bridge replacement. The engineer is working on identifying a temporary route which will be open throughout the bridge construction.

The current plan in Providence is to run Pitman to Gano Street with Sharrows in the road. While state law allows for bikes to use any non-expressway street, and cars should make way for bikes, the planners are aware that the traffic volume on Gano is heavy and fast. Routing the bikeway along Gano may deter some less experienced users from traveling this way. There is consideration of putting the Sharrows on Ives Street instead.

The Pawtucket Citizens Development Corporation and the Blackstone Valley Tourism Council are working on this project, their current funding is limited. They are open to suggestions (which you may post here in the comments) but remember, thier budget is limited.