THAT my friends is a shoveled sidewalk on the Atwells Avenue Bridge over Route 95. Yes, it is true.

But wait, don’t think I’m gonna be all sunshine and moonbeams. A for effort to get this thing cleared so soon after last night’s snowicane, but I have complaints.

Every winter, at some point this sidewalk does get cleared. But this is never cleared: The traffic island on the Downcity side. If I walk all the way over the bridge, the crosswalk drops me on this traffic island, which now has about 3 feet of snow on it. Even on the miraculous day when the bridge sidewalk is cleared, this never is, so it is into the street with me.

But there’s some equal opportunity non-snow clearing at work this morning: The right turn turbo lane from Atwells to the 95 ramp is not touched at all, which was surprising to see. Guess what, the traffic works just fine with out it. Drivers pull up to the light, turn on their directional, and make a right. I say let’s just get rid of that stupid turbo lane, I say we ban all turbo lanes.

Let’s take a look at the rest of my commute.

Considering the intensity of the storm, things weren’t too bad. There is certainly a pattern this winter of those who shovel, and those who don’t Where there was 5 feet of snow yesterday, there is five and a half feet of snow today, no surprises there.

First, as ever, the gold star goes to Angelo’s on Atwells. I don’t think I’ve ever seen their sidewalk unshoveled, even when I’ve been out during the peak of storms past, someone has been out there clearing the snow. Surprisingly, there has been room to walk behind this giant snow mound most of the winter. Unsurprisingly, not cleared yet this morning (aside from Angelo’s, I did most of my walking in the street on the Hill). This parking lot on the corner of Bond Street, they clear their lot, right onto the sidewalk. Thanks guys. Stark contrast to Angelo’s which is right next door. The mounds of snow in LaSalle Square are getting out of control. Most of the sidewalks along the square were clear, but getting from the sidewalk, across the street, to the other sidewalk, was an experience. Bonus, check the new screen on the Dunk sign in action. Someone was working on clearing sidewalks at Trinity Brewhouse, but until then, pedestrians were walking in Fountain Street. Yellow Jackets shoveling snow on Washington Street. And the sidewalks outside Trinity Rep were completely clear. Sidewalks on Empire were in the process of being cleared, had to walk in the street though. Look at this awesome sidewalk on Empire Street, better than the street (which by the way, has a MASSIVE pothole in it). 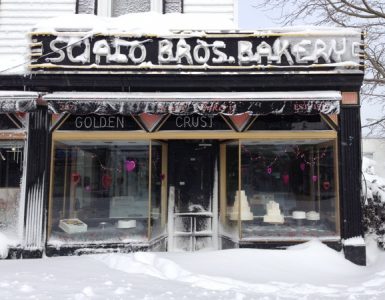 Last part of my morning walk in the snow. From Downcity up Broadway and back to Atwells.

Garibaldi Park on Atwells, cleared but icy: Atwells Bridge, not a 3 foot path, icy: Downcity side, triangle traffic island, not touched at all: Pedestrians are forced into the street at this high traffic intersection:...