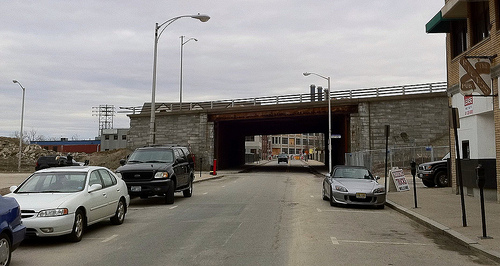 The old Route 195 has been coming down fast and furiously over the last several months, most of the direct impact until now has been shaking buildings and dust, lots of dust. Now come the street closures.

RIDOT announced that Richmond Street where it passes under the old Route 195 will close Monday morning, March 28th at 6am and stay closed for 2 weeks to allow for the removal of the overpass. As always, schedules are weather dependent.

While I am of course thrilled to see the highway come down, as someone who commutes to the Jewelry District on foot, this is the part I’ve been dreading. I don’t walk along Richmond, but Chestnut will be closed down soon enough. I am happy that it is happening as the weather turns (though it might snow again this week). My alternate route is likely along Franklin Street, which would be a terrible walk during the cold winds of winter.

RIDOT has detour information on their website. Amazingly, they have a pedestrian detour map.

The best news of all is this:

The Department anticipates the entire highway demolition project to conclude in late summer.

Video and photos of the Richmond Street overpass demolition.