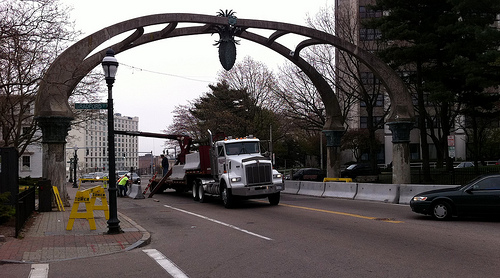 Speculation on my part here, but I’m imagining the installation of Jersey Barriers here is a sign that the renovations to the Federal Hill Arch support columns is finally happening.

Way back in ’09 I posted some photos of the crumbling concrete on the arch’s columns. The Providence Journal also reported that the city was putting a repair job out to bid:

Chief engineer William Bombard said the arch’s four support columns are badly deteriorated, and the city will have to invest between $30,000 to $80,000 to have them wrapped in carbon fiber to prevent further erosion.

It of course would have been nice if the arch had been built properly to begin with:

“It’s possible a lower-grade concrete was used, or there was too much water in the mix when it was made. It should have lasted much longer,” Bombard said.

Does anyone have the official scoop on what is going on here?

Update: Councilman Principe posted on his Facebook page that this is indeed work on the arch (there’s really nothing else it could have been really). The Jersey Barriers are blocking off the outside lanes of the street to allow pedestrians to walk there. Unfortunately, they’ve yet to install ramps to allow wheelchairs to get from the sidewalk, down to the street, and back up to the sidewalk.

Angelo's sidewalks as always are cleared, and someone might have murdered a smurf.

Does anyone know why there is a site fence around Garibaldi Park at the Federal Hill Arch?

While I’m ranting, a post by Councilman Lombardi on Faceplace reminded me that I had a bunch of photos I took over the spring that I meant to post. Share:Click to share on Facebook (Opens in new window)Click to...