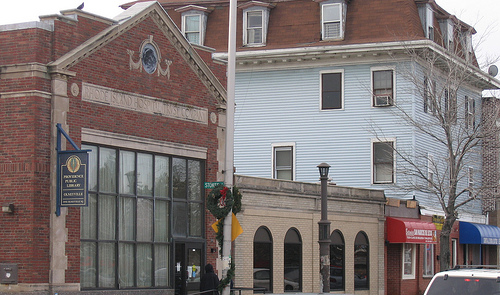 Back in the summer of ’09, when the Providence Community Library took over operations of the branch libraries in the Providence library system (i.e. all except for the downtown main branch), the Providence Public Library was supposed to convey control of the branches to the new group. That never happened and has been a headache for the PCL ever since.

For instance, anyone who follows the PCL on Facebook recalls last summer’s almost daily announcements about the Smith Hill and Knight branches being closed due to heat. Since the PCL does not have physical control of their buildings, they have been unable to secure grants to get the HVAC fixed at those locations. So while other cities open their libraries during extreme heat events as cooling centers, we’re forced to close ours down.

This week, City Council President Michael Solomon and Councilor Seth Yurdin are have requested, in a letter to Providence Public Library Chair, Dr. William Simmons, that the PPL convey the buildings to PCL as agreed.

Branches would be retained by Providence Community Library
May 5, 2011

“I commend Providence Community Library for their hard work and patience in dealing with the PPL over the last two years,” said President Solomon. “The PCL took a system that was failing and turned it around, but much work remains and they cannot move forward until the PPL transfers ownership of these buildings. Outright ownership of these buildings ensures Providence residents receive the most effective and efficient delivery of library services.”

“Countless children and families rely on our library branches not only for books, but for internet access, computer classes, ESL courses, and many other important services as well,” said Yurdin. “It is in the best interest of the City that these buildings are transferred to PCL so they can be maintained properly and so residents will continue to enjoy access to these services.”

Text of Solomon and Yurdin’s letter:

Three years ago, the Providence Public Library (PPL) announced a plan to close five of its nine branches. PPL trustees publicly agreed that they would convey all seven of the PPL’s branches to the City or to another nonprofit to operate as libraries, should the City find such a reduction in services unacceptable. Indeed, the City rejected PPL’s plan and turned to the Providence Community Library (PCL) to provide library services at all nine branch libraries, including the seven owned by PPL. Since July 1, 2009, PCL has successfully operated the libraries.

However, despite the PPL Board’s pledge to convey the branch buildings to the City as delineated in a February 27, 2009 contract signed by PPL and ratified by the Providence City Council, PPL has failed to convey the buildings to the City. PPL has also failed to regularly meet with the City to discuss the transfer of the buildings as required by the contract between the City and PPL dated June 30, 2009. Such tactics of obstruction must cease so the city can adequately provide the most basic of services.

The failure to transfer the branch buildings conflicts with PPL’s charter which charged the institution with establishing and maintaining “in the City of Providence a public library and such branches thereof as may be advisable and to establish buildings for the same; to perform and furnish library services and… to advocate and promote library services in the state so as to enrich the quality of life in Rhode Island.”

We must remind you that the citizens of Providence have contributed large sums of money for the construction, maintenance, and renovation of these library buildings, both through individual donations and through tax monies allocated to support the Providence Public Library system – especially its neighborhood branches. The libraries belong to the residents of Providence, not to the PPL or any other entity.

PPL has long delayed performing a number of critical capital repairs to the neighborhood libraries. By continuing to flout your obligation to convey the libraries to the City, PPL is putting these buildings at risk of closure. This is unacceptable behavior for an institution that publicly claims to be an essential agency of public education and crucial to the infrastructure of the Rhode Island community.

The Providence Public Library needs to end this policy of obstruction that hinders the delivery of critical city services to Providence residents. As City Council leadership, we call upon you to immediately initiate a process for conveying these buildings to the City on or before May 9th. It is the only action that is consistent with PPL’s mission, legal obligations and stated promises to the citizens of Providence.

Providence Community Library (PCL) will host "Meet the Candidates" forums where candidates for Mayor of Providence will respond to questions about neighborhood issues. Planned for April, May, and June, people will have...

Mediated agreement between the City and the Providence Public Library will allow for transfer of ownership of branch buildings to the Providence Community Library.

See update on Main Branch Library at end of post Though it is vitally important to the city, we haven’t been doing a very good job (or any job really) of following the Libraries story here at GC:PVD. Frankly...