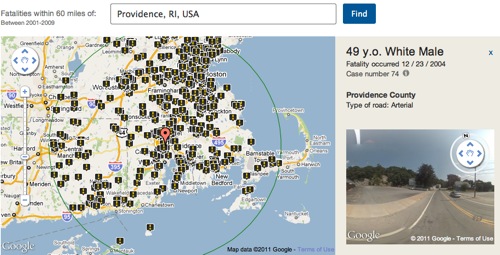 Yesterday, Transportation For America released their report on the state of pedestrian safety in the US. Providence achieved the dubious distinction of being the 4th-most dangerous metro in the northeast for pedestrians. Meanwhile, a short train ride away, the Boston metro was ranked as the most safe (or least dangerous, depending on how you look at it) in the country.

While that makes for good headlines, if you look at the full report of the 52 metros over one-million population, we actually rank 4th (or 5th if you count Pittsburgh as northeast) best in the region. Out of the 52 metros surveyed, we rank 40th (the higher the number, the safer).

What I find most interesting scanning the list is, the more pedestrians there are, the safer the metro is for pedestrians. Safest ranked Boston has 5% of people walking to work in their metro (only 3rd safest New York has more, 6.1%). In the most dangerous metro, Orlando, only 1.2% of people commute on foot (tied with Birmingham, AL for the lowest percentage of pedestrian commuters).

This correlation is not direct, there are metros with lower walk-to-work rates ranked higher (2.2% Cleveland is second safest somehow), but it is pretty apparent at a glance. Certainly there are many factors at play, size of the central city, climate, general health of the population; but it seems apparent that the built environment contributes to people walking more. So is this a chicken or an egg. Do we have more people walking because our city was built that way? Is the city safer because we have more people walking, driver behavior expects pedestrians?

I would assume that our city has a higher walk-to-work rate because our city is built in such a way as to allow people to walk. In our dense urban centers we have minimal wide arterials, we have sidewalks on most streets, our urban areas are compact, allowing for short commutes, etc. However, we spent the last half of the 20th century working against that infrastructure and building for our cars. Much of central Providence is dominated by windswept surface lots, the highways tearing through town degrade the walking environment, streets such as Memorial Blvd. are designed to speed traffic with crosswalks laid down as a quaint habit of our pedestrianized past. Elmwood Avenue, built for the streetcar, is now a highspeed auto dominated roadway.

While Boston and New York and other metros ranked higher than us such as Seattle, Portland, and Minneapolis have started to turn the corner on automobile dominance and have started to build their cities for all users, Providence is falling behind. The Sierra Club of Rhode Island’s Abel Collins was quoted in the PBN on this issue:

Here in Rhode Island, we could be saving lives and encouraging better lifestyles by investing in sidewalks, crosswalks, trails, traffic calming and other safety measures, in addition to better biking infrastructure and world-class public transit. Complete streets in Rhode Island will help save lives and provide safe, convenient transportation choices that will help break our addiction to oil.

Indeed. Abel wrote a post about complete streets for us earlier this year.

In order to be competetive nationally, Providence and Rhode Island must invest in infrastructure that makes it safe and convenient for people to travel by means other than the automobile. The double whammy of an economy in the toilet and gas prices in the stratosphere (at least from an American perspective) highlight the danger of our reliance on the automobile at the expense of pedestrians, cyclists, and transit. A recent report by the National Bureau of Economic Research found that nearly half of Americans are considered financially fragile, unable to come up with $2,000 quickly in an emergency, an emergency such as car repairs. That inability to afford a car when no other means of transportation is avaialable contributes to safety problems for pedestrians in metro areas across the country, including ours.

We currently sit as the 13th safest metro, certainly this is a top-ten list we should really be working to get on.