Often the first sign of demolition is the site fence around a property. Here we see the site fence set up around the Outlet Garage on Friendship Street Downcity.

The Outlet Garage was featured on this year’s Providence Preservation Society list of Ten Most Endangered Properties. Here’s what PPS has to say about the property:

In 1963, Providence’s Outlet Company anticipated the city of the future with the construction of a new multi-story parking garage by architects Gage & Martinson unlike any other structure in the city. A parade heralded its arrival and dignitaries ceremonially cut ribbons. Shoppers were happy for both the convenience and the symbolism of modernity as they streamed across the new “skybridge” from the garage to the department store.

Today, the current owners plan to demolish the parking structure to make room for a surface lot. The Outlet Garage is a symbol of good urban planning that favors parking structures over surface lots which mar the face of downtowns across the country. Downtown Providence has suffered from many holes in its urban fabric over recent years and should not be made to suffer again with the demolition of this structure.

The Outlet Garage further represents Mid-Century Modern architecture, a style that is threatened as properties less than 50 years old are often less understood and consequently more vulnerable to inappropriate treatment or demolition.

I personally have some mixed feelings about the loss of this building. I fully agree with PPS about it being a rare example of mid-century architecture in Providence. I’m personally a fan of the style. And I definately prefer to see structured parking over a surface lot. However, let’s take a look at the building: I love the lines of the structure. But… this structure, coupled with the blank walls of the Johnson & Wales dorm across the street, completely kill the street here.

Surely the garage could be fixed up to return it to its mid-century glory, but that won’t change the fact that the street here is dead dead dead. Perhaps it could be retro-fitted somehow to have retail spaces in the ground floor level, along the lines of what Cornish is planning for the Biltmore Garage.

Of course, that would not be an historic renovation strictly speaking, and it is doubtful that this section of Pine Street would be able to support any sort of retail for the forseeable future. Not only do we have the deadness created by the garage and the dorm here, but down the block, PPAC has a big blank wall fronting the street.

It might be that we need to give up on this section of Pine Street. That it can’t be a vibrant urban place. That is unfortunate, but not the end of the world. Not every street can be a vibrant streetscape, some streets are just to get from point A to B, or a good place to park, or serve as a loading area for the better streets nearby.

So, when I think of giving up on the street, I think yes, let’s save the garage. Hell, let’s expand it onto the portion of the parcel fronting Friendship Street, which already is a surface lot. The street is dead anyway, people all the time cry about the lack of parking, why on earth would anyone want to tear this down anyway? Peter Brassard has a good rundown of the reason’s in a comments on another post:

Parking is a high profit business. Probably the next most profitable land uses are hotels and time-share apartments. The difference with surface parking is that the only upfront costs are for land, asphalt, concrete curbing, and an attendant’s shack. The typical cost for a surface parking space is between $12,000 and $15,000 per spot.

With weekdays – day and evening, weekends, and special events parking, it’s probable that the entire investment can be paid off in as little as two years. If it’s a valet lot, maybe it could be paid off in even less time. Most everything that follows is profit. Is it any surprise that once a surface parking lot is installed in Providence, plan on it being around for at least three or four decades.

An above-grade structured parking space costs roughly $25,000 to $30,000 each. I’m guessing, but assume the Outlet Garage has 360 spaces, if it were to be demolished, perhaps the surface parking lot replacing it would end up with 60 spots. Why is it that 360 spaces in a building is worth much less that 60 spaces on flat ground|Real estate taxes.

If I’m not mistaken the city taxes surface lots as if they were vacant land with grass growing. The city doesn’t need to have a special parking tax approved by the General Assembly, though that would help. All the city has to do is determine an appropriate real estate tax rate for a surface parking lot, different from the rate for vacant land.

Another possibility might be to reverse tax rates, put a higher rate on surface lots and a lower rate on public garages, the taller the garage and more spaces, the cheaper the rate. If it becomes less profitable to operate a surface lot, owners will be prompted to either build a garage on their empty lots or sell the lot to some one that will construct a new building on it instead.

If our tax structure favored structured parking and didn’t make surface parking a virtual ATM, we probably wouldn’t be considering this at all.

This post is becoming as scattered as my feelings on the garage. Here’s what I’m trying to say.

First, I wish we just weren’t talking about this at all. I wish the conditions that make a surface lot more attractive to a property owner did not exist and that this garage would just continue operating (ideally with some cosmetic upgrades).

Second, on the cosmetic upgrades. When I think about this place in my head, I see the garage levels, and those beautiful mid-century designed lines of the structure, the curve of the concrete on the underside of the decks, etc. But then when I walk by I remember how crap it is to stand next to. The blank walls, the general oppressiveness of the whole thing and I think, “eh, whatever, tear it down if you want to.” Then I remember that nothing but parked cars will replace it and I think about how much worse that will be.

Third, I think about how a structure replacing this could make the street better. Again, I don’t see this street supporting retail, it doesn’t have the foot traffic, and the street fronts are non-continuous, there’s some big blank spaces that aren’t going anywhere. However, I could see a nice row of townhouse style apartments, with stoops and trees and what-have-you.

So what it comes down to is, it totally sucks that we’re going to see a(nother!) surface parking lot here. But, I can’t remotely get worked up enough about this building to even think about chaining myself to any bulldozers over it. Does that make me a bad urbanist? 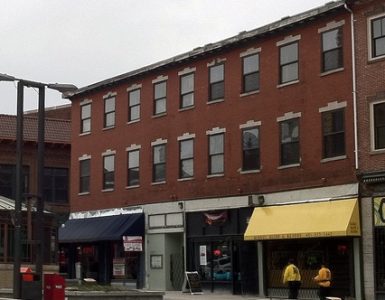