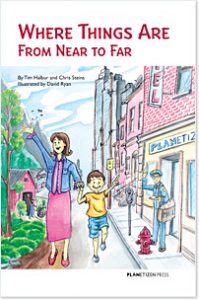 Where Things Are, From Near to Far: A Children’s Book About Planning [Planetizen]

While playing in the city park, little Hugo wonders, “Who put these buildings here?” Hugo’s mother leads him on a whirlwind trip through the city, the country, and everything in-between to explain the answer. This engaging book is an easy introduction to the world of urban planning, and illustrates that “every building has its place.”

In case anyone was wondering, I am not too old for you to buy this for me.

There are 23 plans run by 18 municipalities – about half the 39 cities and towns – that “are considered at-risk” because of underfunding, former Auditor General Ernest Almonte told the pension advisory group Wednesday. They include Providence, Warwick, Cranston, Pawtucket and East Providence – the state’s five largest communities and key parts of its economic engine.

This fall’s special legislative session on pensions is unlikely to do anything to address those local plans, focusing instead on the ones run by the state. But Almonte and Cranston Mayor Allan Fung warned of dire consequences if the independent plans’ problems aren’t addressed soon, and Governor Chafee proposed the MAST Fund partly due to those concerns.

Detroit will never be what Brooklyn is. But at the risk of sounding like the girl who didn’t get asked to prom telling us that she “didn’t really want to go anyhow,” I don’t think that the people that make Detroit exciting are looking to recreate Brooklyn; they’re looking to revitalize the city they love. They aren’t attracted to an anonymous blank slate, but to joining a community committed to doing good in a big city.

Bennett: “Shame on us” if we don’t create hundreds of jobs at the Port of Providence [WRNI]

Conditions are ripe in Chicago to try launching the first true bus rapid transit system in the U.S., according to advocates who will unveil their blueprint Wednesday.

The proposal being introduced by the Metropolitan Planning Council calls for starting with a network of 10 CTA bus rapid transit routes covering about 95 miles of mostly bus-only lanes, with buses making stops every half mile at special stations where passenger prepay their fares just like at rail stations.

Ted Nesi covers Central Falls, moving from a consumption to a production economy, making use of our alleyways, and more in today's News & Notes.

Georgetown’s ‘Social Safeway’ is a monument to changing supermarket architecture [The Washington Post] New grocery store is built on the second floor, with street level retail screening a parking...