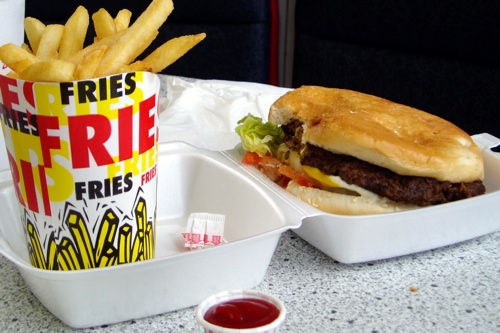 Denmark is the first country in the world to impose a “fat tax.” The Christian Science Monitor reports:

The Nordic country introduced the tax Saturday, of 16 kroner ($2.90) per kilogram (2.2 pounds) of saturated fat in a product.

The tax was approved by large majority in a parliament in March as a move to help increase the average life expectancy of Danes.

Denmark already has a tax on sugary foods such as candy and soda, as do many other European countries. The Danish government imposed the tax as part of measures to increase the country’s life expectancy, which has recently begun to fall.

If Rhode Island imposed such a tax, the revenue could be put towards RIPTA. A tax on unhealthy food would help to reduce consumption of such foods, and using the proceeds to fund RIPTA would allow the agency to better serve people providing an alternative to driving. As transit riders walk for part of their trips, improved transit would result in health benefits for riders.

Crazy yes, but we’ve had no problem taxing cigarettes. The Danes put the cigarette tax and the sugary and fatty foods taxes all under one umbrella of improving the health of the country’s citizens.

Photo by Jef Nickerson ProJo reports that RIPTA is once again, in a now annual tradition, looking at fare hikes and service cuts to balance their budget deficit. John Rupp, the board chairman, said it will try to design...