WPRI reports that City Councilman Michael J. Correia (Ward 6) was struck by a hit and run driver around 6pm last night n Atwells Avenue. Happily, this morning the Councilman is out of the hospital and on the mend.

Correia was thrown 10 feet from his car and knocked out by the blow from the vehicle, which was described as a dark-colored Ford Escape SUV, according to Correia’s family members and Providence Acting Police Chief Hugh Clements Jr.

“I’m very lucky,” Correia told WPRI.com. He was treated at Rhode Island Hospital and then released, and is now resting at home with his family. He said he has brusies on his side and his arm.

Councilman Hassett was struck on the Federal Hill section of Atwells Avenue, Councilman Correia was struck further west in the Olneyville section. WPRI describes the location as the 800 block, which would place it near the intersection with Academy Avenue.

So what’s the take away here? Our streets are dangerous. We should probably do something about it before we have to hold all of our City Council meetings in the hospital.

The following statement was released this morning by Councilman Correia:

I’d like to thank everyone for their concerns at this time. I am very fortunate to have sustained no major injuries, but I do have the expected bumps and bruises. I am now home resting with my family and plan to be back serving the people of Ward 6 and the City of Providence very shortly.

Curb extensions being installed on Atwells

Atwells Avenue at Sutton Street. It has been nearly three years since City Councilman Terry Hassett was struck and severely injured by a hit and run driver on Atwells Avenue; one in a long line of pedestrian injuries... 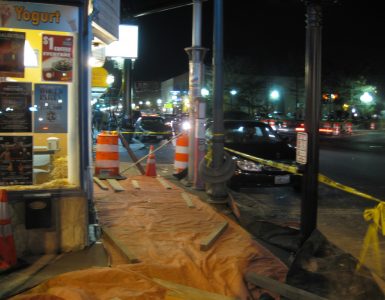