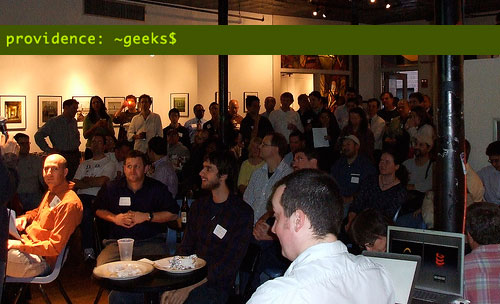 Did you know that Portsmouth, Rhode Island is arguably the barcode capital of the world?

Yup. Thanks to A2B Tracking Solutions – the leading provider of turn-key solutions for bar code tracking.

Since it was founded in 1994, A2B has led the bar code industry movement into mobile computing, developing a state-of-the-art mobile tracking system for United Parcel Service (UPS). Principals of A2B include founders of the bar code industry, who have lead innovations in applications for 50 years. To date, A2B has completed more than 3,000 tracking installations around the world. This Wednesday, A2B CEO Peter Collins will tell the story of how their industry-defining company has gotten to where it is, and where it’s headed next.

P.S. My apologies for the late notice on this month’s Geek Dinner. I have a bunch of excuses, but they are boring. Going forward, we’ll be making a concerted effort to get the announcements out earlier!

PS! Jack’s excuse for being late with the notification on this month’s Geek’s Dinner is far from boring, but if he’s not going to shout it our on his own blog, than I won’t shout it out here. Let’s just say, congratulations are in order!

Using its patented Packet Energy Transfer (PET) technology, this VoltServer has figured out how to no-less-than digitize electricity...