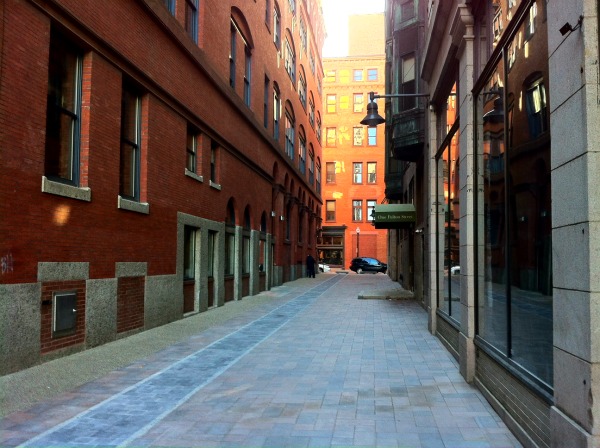 Work wrapped up last week on pedestrianizing Fulton Street Alley. It was more or less pedestrianized already with a gate blocking vehicle access, however it was dank, dark, and unattractive. With new pavement treatments and lighting on the surrounding buildings, the street becomes a much more attractive pedestrian connection between Union Street and City Hall and Kennedy Plaza beyond.

In the warmer months, tables and chairs could be brought in to allow people a place to sit and eat and socialize during the day. There is also the possibility of activating the space with an outdoor marketplace.

Lucie Way features outdoor dining and drinking for Viva Mexico and The Stable as well as entrances for AS220 studios which are not accessible from the front of the building on Washington Street.

What other streets should be get this treatment?

In the windows of the large, street corner, sidewalk-fronting retail space that wraps around where Memorial Boulevard meets Francis Street are large “coming soon” CVS/Pharmacy signs. The pharmacy-less CVS on...