As always, the DID Clean & Safe Team workers were out in force today clearing snow. The Yellow Jackets are probably out of practice this year, but they got right back into the swing of things laying salt and clearing snow and slush out of the crosswalks.

The Bad: I didn’t know this was a parking lot

When plans for PPAC Square were unveiled I was under the impression that PPAC’s driveway would double as sidewalk space when there wasn’t any event happening at PPAC. Apparently I was wrong as the driveway was full of parked cars this afternoon. I don’t know who these cars belong to, but those are some sweet parking spaces they got.

No sooner has the paint dried on the double yellow lines than National Grid is out ripping up the pavement on Weybosset Street. This is not actually PPAC Square, it is down in front of Johnson & Wales, but close enough.

Let’s just assume that contrary to every other street National Grid has ever torn up, they will properly patch this street. I can assume that, right? RIGHT? 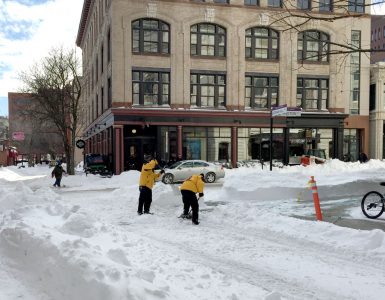 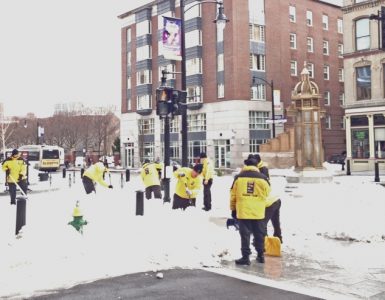 Well the storm was a dud, but the sidewalks were slippery this morning none-the-less. Downcity this morning, the Yellow Jackets were out clearing snow. Thanks guys (and gals)! Photos by Jef Nickerson Share:Click to...