Press Release from the City of Providence (see below for details about this afternoon’s Occupy Providence Press Conference):

PROVIDENCE, RI – The Roman Catholic Diocese of Providence will open and staff a homeless day shelter in response to the identified need for such a resource. The day shelter makes way for the peaceful end of Occupy Providence’s encampment in Burnside Park.

The day shelter will be housed at the Diocese of Providence’s Emmanuel House in South Providence, which the Diocese established as an emergency winter overflow homeless shelter in December, 2010 at the site of the former Carter Day Care facility.

The City of Providence, though not in a position to open and resource a day shelter, was successful at convening homeless advocates and other community partners to reach a mediated resolution to Occupy Providence’s encampment in Burnside Park.

Mayor Taveras expressed his gratitude to Bishop Thomas J. Tobin and the Diocese of Providence for their efforts. The Mayor also thanked Public Safety Commissioner Steven ParÃƒÂ© and City Solicitor Jeffrey Padwa leading the city’s response to the encampment in Burnside Park, which nationally distinguishes Providence’s response to the Occupy movement.

“This would not have happened without the Diocese of Providence’s involvement and willingness to help in this effort, and I am extremely grateful to Bishop Tobin. I also commend Commissioner ParÃƒÂ© and Solicitor Padwa for their steady, mature leadership,” said Mayor Taveras.

“The Diocese of Providence is pleased to expand its ministry to Providence’s homeless community,” said John Barry, Secretary for Catholic Charities and Social Ministry. “Establishing a day shelter at Emmanuel House is consistent with the Catholic Church’s efforts to provide safe, warm shelter to those in the greatest of need during the winter months.”

Providence has received national attention for the city’s peaceful and civil approach to ending the unsafe, illegal encampment inside Burnside Park. Commissioner ParÃƒÂ© has communicated on an almost daily basis with protest organizers since the occupation began on October 15. Rather than forcibly evict the protesters from park, the city has engaged in court mediation to arrive at a solution that satisfies OP’s stated commitment to end their encampment in exchange for creation of a homeless day shelter.

The Taveras administration will remain focused on the truly important work at hand, in Providence and across our nation: Creating jobs, improving our schools, addressing the foreclosure crisis, and working with responsible community partners to support the most vulnerable among us.

Occupy Providence will have a Press Conference at Providence City Hall this afternoon:

For too long, homelessness and poverty have been treated like a personal deficiency rather than a failure of our economic system. The day center is a first step in recognizing the needs of marginalized Rhode Isanders who find themselves homeless. Occupy Providence hopes this move can inspire the people of Rhode Island and the United States to realize that the voice of protest is a powerful one and that together we can achieve the changes we wish to see in our society.

WHAT: Press conference to announce Occupy Providence’s victory in the establishment of a daytime homeless resource shelter in exchange for the suspension of its overnight protest, which has been occupying Burnside Park around the clock for over 100 days. 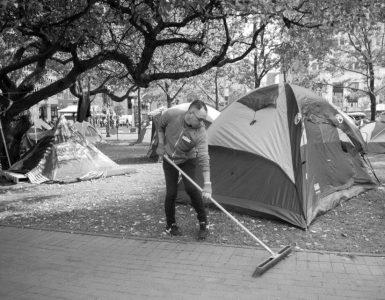 The Occupation and Public Space

What should the Occupy movement's future relationship with Burnside Park look like?

If I were Mayor of Providence, and all the other mayors were coming to visit I would show them the following 10 sites (in no particular order), providing I was in a good mood: The gardens at South Side Community Land...