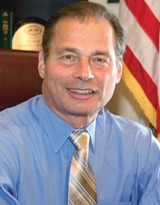 Ruggerio stopped his car, a black Buick sedan, in the middle of the road instead of pulling over to the side and later failed a field sobriety test, according to the arrest report. Patrolman Walter Larson, the arresting officer, said Ruggerio had bloodshot, watery eyes, “heavily slurred speech,” “a strong odor of consumed alcohol” on his breath and swayed from side to side.

Ruggerio has been described as “taking full responsiblity for his actions.” However, WPRI quotes him as saying:

“Last evening the vehicle I was driving in Barrington was pulled over by the Barrington Police. I declined a breathalyzer test.” He did not say whether he was inebriated at the time.

Ruggerio went on to say:

“I accept full responsibility for my actions last evening and regret how this may impact my family, my constituents, my colleagues and the Senate. I look forward to resolving this matter and continuing to serve my constituents as vigorously as I have for the past 32 years.”

No, stop. Serving in the Senate is a privilege, and Senators (and Representatives and all elected offials) need to be held to a higher standard. You are trusted to represent the rest of us to govern the state, and then you go and drive drunk though Providence and the East Bay putting at risk the lives of those you claim to serve. I don’t care how long you’ve served, you’ve broken the public trust and if you were taking full responsibilty for your actions, you would step down.

You know what else someone who is taking full responsibilty does, they apologize. Nowhere in Ruggerio’s statement do I see the words “I’m sorry.”

But why should Ruggeiro resign, none of his colleagues seem too concerned about what he has done. Here is Senate President Teresa Paiva Weed’s statement as reported by RINPR:

“Leader Ruggerio is addressing the legal issues which arose last evening. This obviously concerns me, but I am reassured by the fact that he is accepting full responsibility for his actions. I am confident that this issue will not distract him from his duties and that he will continue to be an effective leader in the state senate.”

Madame President, he has not taken full responsiblity, he has not directly apologized, and he is a lawmaker who has broken a very serious law and put the lives of many Rhode Islanders at stake in doing so. Is appearing in court and maybe a few weeks in “rehab” really enough for you?

No one else in the Senate or in the Democratic Party as a whole has stepped up to address the fact that drunk driving is a serious offense. What if he had been running through the streets of Barrington shooting a pistol randomly? If no one was hurt, would that be OK? Oopsie, stuff happens? Because that is basically what he did with his car, no one was hurt so it was an oopsie.

We’re never going to get our house in order if we allow our elected officials to not be held accountable for their actions. Senator Ruggerio should actually take full responsiblities for his actions and resign, making room for someone who deserves the public’s trust. 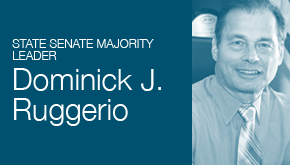 PHOTO OP: Demolition of house to make way for parking

"A vacant house adjacent to the Salvatore Mancini Resource & Activity Center will be demolished tomorrow thanks to the efforts of Senate Majority Leader Dominick J. Ruggerio." 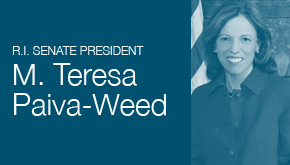 Senate President asks us all put all this egregious lawlessness within her chamber "behind us."