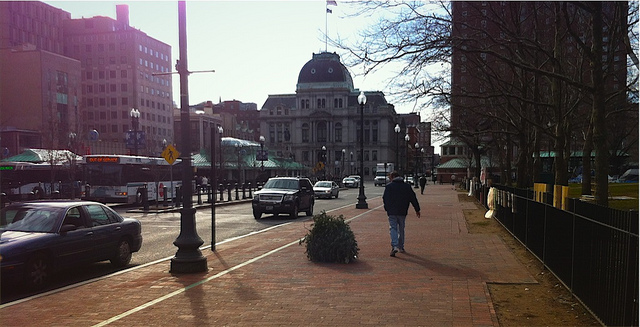 State Sen. John J. Tassoni Jr. apparently thinks RIPTA’s CEO, Charles Odimgbe, hired in November 2010, should be able to work some sorts of miracles with the lack of funding the agency receives from the state.

Odimgbe arrived in Rhode Island to find an agency whose annual budget crisis had morphed into some kind of sad joke. As we know, as gas prices go up people drive less, and rely on RIPTA more, and that driving less equals less gas tax which means less money for RIPTA. Instead of addressing that issue, the Assembly continues to blame RIPTA’s budget woes on poor management, even though a report commissioned by the Assembly found the agency to be well run.

RIPTA has been forced to cut staff to attempt to avoid service cuts and fare increases which would only lead to less people using its services. And now instead of addressing the agency’s budget issues head on, Sen. Tassoni calls for the outer of its leader because Kennedy Plaza is too dirty.

I’ve recently joined the board of Greater Kennedy Plaza, an organization seeking to improve the public space at Kennedy Plaza and it’s parks. At both the Board meetings I’ve attended, Mr. Odimgbe has been there, enthusiastically supporting the work of Greater Kennedy Plaza. He’s committed to ensure the Plaza become a better place both for the operation of RIPTA and for the enjoyment and economic health of Providence as a whole.

Instead of calling for people’s ouster, let’s see if the Assembly, RIPTA, and the Governor can actually work together to address RIPTA’s budget problems and build a better system. Ousting Mr. Odimgbe will do nothing to address the real problems, and will just leave a potential replacement being blamed for mismanagement in the future.

Armed with pictures showing piles of debris scattered around the RIPTA bus waiting area on Kennedy Plaza, Senator Tassoni (D-Dist. 22, Smithfield, North Smithfield) said the situation is further indication that “the person that was hired to fix the problems at RIPTA is not doing a very good job of handling day-to-day operations, and that makes me wonder how qualified he is to address much bigger problems at the bus company.”

The upkeep of the bus waiting and transfer area at Kennedy Plaza is the responsibility of the Rhode Island Public Transit Authority, said Senator Tassoni. “Apparently, in a rush to appear as if he was getting a grip on RIPTA’s budget problems, CEO Charles Odimgbe eliminated a number of employees, including those responsible for maintenance of the authority’s facilities, including Kennedy Plaza.”

“The result of that decision may have saved a few dollars, but it has left no one to do the job of cleaning up Kennedy Plaza,” said Senator Tassoni. “That is certainly not doing anything to improve the reputation of RIPTA and I’m sure that the Providence mayor can’t be too pleased that Kennedy Plaza is starting to look like a dump because RIPTA is not doing its job of cleaning up after itself.”

Senator Tassoni said it’s become obvious to him that the RIPTA CEO “is not making the hard decisions necessary to address the serious and ongoing budget problems. Rather than making cuts by trimming the ranks of the well-paid middle- and upper-management personnel, he eliminates a lowly position and Kennedy Plaza is left to become a mess. Rather than implementing serious efficiencies, he testifies before the finance committee that his only options are to raise rates or cut bus routes.”

“I think it is clear Mr. Odimgbe is not up to doing the job for which he was hired and that it is time for the governor to replace him with someone who can,” said Senator Tassoni.